Over 37,000 people have fled Central African Republic since December – UN

Over 37,000 people have fled Central African Republic since December – UN

5 April 2013
Since violence flared up again in the Central African Republic (CAR) in December, more than 37,000 people have fled the country, the United Nations refugee agency said today.

Since violence flared up again in the Central African Republic (CAR) in December, more than 37,000 people have fled the country, the United Nations refugee agency said today.

“The help needs of these refugees are significant. Many left their homes in a hurry and were unable to bring personal belongings with them,” the spokesperson for the Office of the UN High Commissioner for Refugees (UNHCR), Adrian Edwards, told reporters in Geneva.

“People are either without places to live or being accommodated by local families – who themselves live in extreme poverty,” he added.

Since December, 30,876 refugees have found asylum in the Democratic Republic of the Congo (DRC), 5,600 have fled to Chad, and 1,024 arrivals have been registered in Cameroon.

The refugees are mainly from the capital, Bangui, which was seized by rebels of the Séléka coalition last month, as well as the cities of Bangassou, Rifai and Zemio in the south-eastern part of the country.

“We are working with authorities in all three receiving countries to provide protection and assistance,” Mr. Edwards said. “Our teams across the region are registering the refugees, distributing aid and setting up emergency shelters. We are also working with our humanitarian partners to provide health and education support wherever possible. This is often in remote and hard to reach locations.”

Mr. Edwards said refugees are scattered along a 600-kilometre stretch of the CAR border, and UNHCR is focusing on moving them into camps to be able to provide them with assistance.

In DRC, UNHCR is planning to expand already established camps, and in the North-Ubangi District, it has begun clearing 400 hectares of land to create initial capacity for at least 10,000 refugees. The agency also plans to build six transit centres in addition to the main centre at Bondo in the Orientale Province.

In addition to the 37,000 CAR refugees, some 173,000 people have been internally displaced by the violence. Mr. Edwards said UNHCR has not been able to provide adequate humanitarian assistance to those displace inside the country due to the volatile security situation. 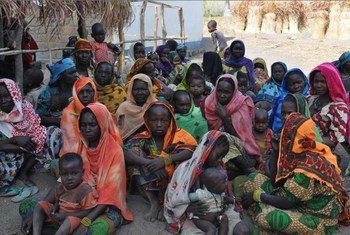 3 April 2013
Secretary-General today expressed alarm at the ongoing insecurity in the Central African Republic (CAR), and in particular by reports of grave violations of human rights, including rape and recruitment of child soldiers.