4 April 2013
On the eve of a meeting between the United Nations and the Governments of Côte d’Ivoire and Liberia to address an outbreak of violence on the border, a senior United Nations peacekeeping official said security remains a priority in the country, particularly as preparations continue for upcoming local elections there.

Tomorrow’s quadripartite discussion in Monrovia – including the participation of officials from the neighbouring Governments and representatives of the UN Operation in Côte d’Ivoire (UNOCI) and the UN Mission in Liberia (UNMIL) - will assist the security of the region, as well as address the sources of conflict, including return of refugees and distribution of humanitarian aid, the Special Representative of the Secretary-General for Côte d’Ivoire, Albert Gerard Koenders, told UN Radio.

UNOCI and UNMIL reinforced their patrols after an attack last month by armed elements in Petit Guiglo, in Côte d’Ivoire’s western region. Blue helmets have deployed to Petit Guiglo, and are supporting Ivorian forces and protecting civilians through ground and air patrols.

Security is a primary concern as Ivorians prepare for the 21 April local polls. A 2010 presidential election, meant to be a culminating point in the peace process, resulted in months of violence when former President Laurent Gbagbo refused to step down after losing to Alassane Ouattara, who finally took office in May 2011.

“If you have elections then tensions will rise,” said Mr. Koenders, who is also the head of UNOCI.

“Our mandate is to assist Ivorian actors to ensure that in all those different constitutes there are peaceful elections, and also calling on politicians to remain calm and really have open and free and transparent elections,” Mr. Koenders noted. He added UNOCI also provides technical support to the polls through support to the independent electoral commission.

UNOCI has been supporting the reunification and stabilization of the West African country, split by civil war in 2002. The Security Council extended its mandate by one year in July 2012, but it is possible that its responsibilities might be revised when the 15-member body discuss UNOCI this year.

“We are slowly in a situation of transition in the mission,” said Mr. Koenders, who is at the UN Headquarters this week to discuss the situation in his region and to defend the proposed Mission budget for the upcoming year. He depicted UNOCI as focusing on four factors: security, confidence-building, human rights and job creation.

As a peacekeeping mission, Mr. Koenders said, UNOCI is creating a “security net” for Ivorians to take over their security with less assistance from the UN.

The UN is also assisting capacity-building measures to better unify the army and to create more confidence between the army and the gendarmerie.

Mr. Koenders noted the Mission’s work in support of respect for human rights and equitable justice, which “requires an investment and political willingness from Ivorian authorities with support in a technical way from us.” He added that justice must be equitable and “independent of the political affiliation of those who are suspected of serious crimes.”

To assist the Ivorians, the UN is supporting the Government and partners to establish “catalytic programmes to create jobs, return of social service and so on” so that “increasingly the Ivorians see the dividends.”

Economic growth in Cote d’Ivoire is predicted to reach 9 per cent this year, Mr. Koenders said, “but in many areas it is important the people see the difference.” 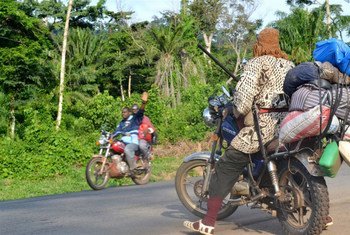 25 March 2013
The United Nations peacekeeping missions in Côte d’Ivoire and neighbouring Liberia have been reinforcing their patrols after an attack by armed elements in Petit Guiglo, in Côte d’Ivoire’s western region.