Secretary-General Ban Ki-moon said today he is “deeply concerned and troubled” by the rising tension on the Korean Peninsula, and called on all parties concerned to help calm the situation.

Speaking at a joint press conference in Monaco with the Principality’s Minister of State and Chief of Government, Michel Roger, Mr. Ban cited the “very negative inflammatory rhetoric” coming from the Democratic People’s Republic of Korea (DPRK) as the main cause of the increasing tension.

“I have been urging repeatedly that nuclear threat is not a game and they should fully abide by the relevant Security Council resolutions,” he stated.

The Secretary-General also voiced the hope today that the recent measure to restrict the movement of personnel and goods in and out of the Kaesong industrial complex in the DPRK will be lifted as soon as possible.

On Tuesday, Mr. Ban stressed the current crisis on the Korean peninsula “has already gone too far,” following DPRK’s announcement that it will restart its Yongbyon nuclear reactor. He called for dialogue and negotiations, underlining that this is “the only way to resolve the crisis,” and expressed his readiness to help all the parties involved to this end.

Before wrapping up his visit to Monaco, the Secretary-General and Mr. Roger also exchanged views on a number of other issues, including the ongoing crises in Syria and Mali, underscoring the urgency of doing more to also address the growing humanitarian needs arising from those situations.

“I am concerned that if by any misjudgement, by any miscalculation of the situation, if any unwanted crisis happens on the Korean Peninsula, this will have very serious implications,” he stated, adding that the parties should engage in dialogue to resolve all pending issues.

While in Madrid, Mr. Ban also attended a high-level UN meeting on hunger, food security and nutrition, issued a call to action to make the most of the remaining 1,000 days to achieve the anti-poverty targets known as the Millennium Development Goals (MDGs), and met with Crown Prince Felipe.

Mr. Ban and the Prince of Asturias discussed the importance of accelerating efforts to reach the Goals, as well as the importance of the ongoing work to define a comprehensive development agenda beyond the 2015 deadline. They also exchanged views on DPRK and other matters. 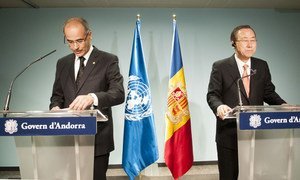 Secretary-General Ban Ki-moon today stressed the current crisis on the Korean peninsula “has already gone too far,” following an announcement by the Democratic People’s Republic of Korea (DPRK) to restart its Yongbyon nuclear reactor.