The meeting, called the ‘dialogue tree’ after a concept borrowed from African traditions, focused on initiating a discussion among key human rights stakeholders as the sub-region faces new threats to human rights and stability due to the crisis in Mali.

“The dialogue tree was the place where all members of the community would meet to discuss matters of general interest, and issues affecting them,” said the head of the UN political office in Mali (UNOM), David Gressly, at the opening ceremony. “From that perspective, the dialogue tree represents an authentic tool for participation and, therefore, the promotion of human rights.”

“These threats now include the lack of legitimacy of the State authority in some cases, transnational organized crime and drug trafficking, terrorism, as well as various kinds of extremism,” said Mr. Gressly.

“The existence and preservation of the foundations of States and societies which are based on the rule of law, human rights, civil liberties and social justice are now at stake. We will continue to fight for these values and mobilize for strengthening West African States in order to allow them to better play their role in that regard.”

The meeting, which was jointly organized by UNOM and the UN Office for West Africa (UNOWA), is the first of its kind in a series of consultations. In a news release, UNOWA said the dialogue tree meetings seek to become a platform for informal exchanges on issues relating to governance, rule of law, human rights, gender, peace and security in the region.

“This meeting is an illustration of the partnership between UNOWA and UNOM to accompany Malian and West African actors in identifying solutions to new rising challenges,” said UNOWA Chief of Staff, Moudjib Djinadou. 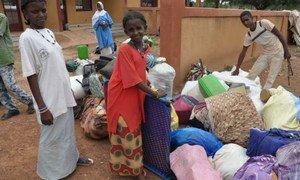 The United Nations could have a peacekeeping operation in place in Mali this July, with approval from the Malian Government and the Security Council, a senior United Nations official today said wrapping up his week-long visit to Mali.