Ban Ki-moon today praised Monaco for its commitment to sustainable development and green growth during a first-of-its-kind visit for a Secretary-General, coinciding with the Principality’s 20th anniversary of membership in the United Nations.

“You are helping to lead the world into a sustainable 21st century,” Mr. Ban said in a speech at the Museum of Oceanography, overlooking the Mediterranean Sea.

“Today from this magnificent setting, I issue a call to the world: I ask every citizen of our planet to think about what you can do to care for the global environment and promote sustainable development,” he added.

Addressing Prince Albert II, Mr. Ban said his Foundation is globally recognized for its work on biodiversity, water and the fight against climate change, while the Principality’s smart policies, such as encouraging electric vehicles, “are pointing the way towards a low-carbon economy.”

Mr. Ban issued a warning on climate change, saying the world is “approaching environmental tipping points” that include the increasingly melting North Pole and permafrost in Siberia and Alaska.

He called for a “universal, legally-binding climate agreement by 2015” and added that he will convene a high-level meeting on climate change next year.

“We cannot end extreme poverty, hunger and needless disease unless we address the broader challenges of sustainable development – social, economic and environmental,” Mr. Ban said, highlighting the importance of sustainable goals within the anti-poverty targets of the Millennium Development Goals (MDGs) and the new targets to be created as part of a post-2015 agenda.

Later this week, Mr. Ban added, he will launch a global call to accelerate progress on the MDGs with a 1,000-day countdown “to make good on our promise.”

Mr. Ban’s visit to Monaco comes ahead of its 20th anniversary of membership in the UN, officially marked on 28 May.

The Principality will host next month a Model United Nations, a simulation of the UN General Assembly and other multilateral bodies with student participants.

Ahead of the speech, Mr. Ban had an audience with Prince Albert, during which they discussed developments in Syria and Mali. They also discussed sustainable development and the MDGs.

Tomorrow, Mr. Ban will have further meeting with Government officials in Monaco and visit a laboratory run by the International Atomic Energy Agency (IAEA).

He then heads to Madrid for meetings with Spanish officials, including the Crown Prince and the Prime Minister, and he will attend the Chief Executives Board meeting, which brings together the senior leadership of the wider UN system.

♦ Receive daily updates directly in your inbox - Subscribe here to a topic.
♦ Download the UN News app for your iOS or Android devices.
monaco 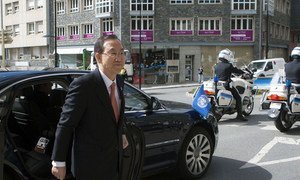 During a visit to Andorra, Secretary-General Ban Ki-moon today praised the Government’s remarkable success in empowering women, and encouraged the European country to continue promoting women’s political participation around the world.