3 April 2013
The United Nations political chief today stressed the need to tackle an array of political, governance and security challenges to help resolve the crisis in Mali, as he outlined Secretary-General Ban Ki-moon’s options for a possible UN peace and security presence in the country, including the deployment of a UN stabilization mission.

“The serious and inter-linked challenges that confront Mali require concerted and broad-based efforts by the Malian authorities and its people, together with significant international support,” Under-Secretary-General for Political Affairs Jeffrey Feltman told the Security Council, as he briefed the 15-member body on Mr. Ban’s proposals.

“They go beyond addressing security threats and require tackling the deep-rooted political, governance, development and humanitarian challenges that are not susceptible to any easy solution,” he added.

In his report on the situation in Mali, the Secretary-General proposes two options for UN engagement in the country, where renewed fighting since January 2012 has uprooted hundreds of thousands of people and prompted the Malian Government to request assistance from France to stop the military advance of extremist groups.

Under the first option, a UN multidimensional integrated political presence would operate alongside AFISMA, the African-led International Support Mission in Mali, which the Council authorized in December, at the request of the Government, to support national efforts to recover the north from the insurgents.

The UN, noted Mr. Feltman, would also continue its political and human rights activities under a strengthened political mission, focusing on good offices, support for mediation and national and community dialogues; assistance to the electoral process; promotion of respect for human rights, including with respect to women and children; and support for AFISMA. Under this option, AFISMA would be responsible for security, together with bilateral military efforts.

The second option involves the establishment of a UN multidimensional integrated stabilization mission under a Chapter VII mandate alongside a parallel force. In addition to a political mandate, the mission would carry out security-related stabilization tasks, protect civilians and create the conditions for the provision of humanitarian assistance.

“Under this second option, the bulk of AFISMA would be re-hatted under this UN stabilization mission. Most of the military, police and civilian components would operate in the north, with a light presence in Bamako,” said Mr. Feltman.

“Given the anticipated level and nature of the residual threat, there would be a fundamental requirement for a parallel force to operate in Mali alongside the UN stabilisation mission to conduct major combat and counter-terrorism operations and provide specialist support beyond the scope of the UN mandate and capability,” he added.

The two options can be viewed as phases in the gradual process of transition from the current situation to a UN stabilisation mission deployed alongside a parallel force, he said. “They take into account the fact that the UN is operating in a new geopolitical context and faces threats that have not been encountered before in a peacekeeping context.

“The situation on the ground remains fluid, and extremists and criminal elements continue to pose a significant threat to the safety and security of civilians and UN personnel in Mali.”

Mr. Feltman also noted that, under either option, the UN would maintain a strong focus on the political aspects linked to the creation of suitable conditions for elections and reconciliation. The UN has offered its support for the holding of free, fair, transparent and credible polls, which interim President Dioncounda Traoré says he intends to hold by 31 July 2013.

“We agree fully with the Malian authorities that a legitimate government reflecting the will of Mali’s diverse population needs to be in place by the end of 2013, and we encourage continued consultations among Malian actors to achieve that goal. The Secretary-General is firmly committed to the UN doing its part to support that objective,” he stated.

On the humanitarian front, he reported that while access has improved in some parts of the country, the situation remains “highly volatile,” particularly in Timbuktu and Gao. Currently, more than 470,000 people are estimated to have fled and sought refuge either in Malian host communities or in neighbouring countries.

Also, while arbitrary acts of violence against Tuaregs and Arabs have recently decreased, there is still a risk of reprisal against members of these communities, who are alleged to be associated with the armed groups. “Worryingly, it appears from reports that new patterns of human rights violations have emerged, including retaliatory attacks based on ethnicity,” said Mr. Feltman.

He added that the most significant development in the political process remains the adoption in January of a Roadmap for the Transition, which highlights two priority tasks for the transitional

Government: the restoration of territorial integrity and the organization of free and fair elections.

The Roadmap also provides for reform of the armed forces and dialogue with groups who renounce terrorism and adhere to the unitary nature of Mali and its constitution.

In that connection, Mr. Feltman noted that the UN Office in Mali (UNOM), which deployed in January, is providing good offices aimed at facilitating contacts between the Government and those groups that wish to take part in the search for a political solution to the crisis.

“It is of critical importance to ensure the security imperative does not detract from the primacy of politics in Mali, in both the short and long term. In addition to national dialogue, multiple dialogues need to take place between and within communities and between various actors, including the Malian armed forces.” 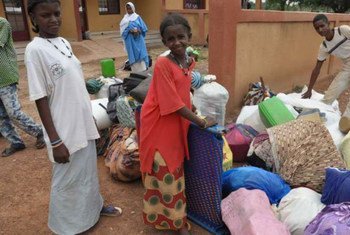 16 March 2013
The United Nations could have a peacekeeping operation in place in Mali this July, with approval from the Malian Government and the Security Council, a senior United Nations official today said wrapping up his week-long visit to Mali.