UNHCR
These displaced Somali women head back to their families carrying aid distributed in Mogadishu.

3 April 2013
A United Nations envoy has arrived in Somalia on an information-gathering visit to raise awareness and discuss ways of addressing sexual violence in the Horn of Africa country.

“I decided to make a trip to Somalia because I believe the country is embarking on an important and exciting journey after many years of conflict,” said the Special Representative of the Secretary-General on Sexual Violence in Conflict, Zainab Hawa Bangura.

“The Government has been engaged in this discussion and has expressed openness to developing a framework of cooperation to address sexual violence,” Ms. Bangura added in the capital city of Mogadishu. This is her visit to Somalia in her current capacity.

Ms. Bangura today met with UN officials, including from the UN Political Office for Somalia (UNPOS), as well as civil society partners and a range of stakeholders to listen and learn about the challenges faced in tackling sexual violence.

A team of experts from her office will be deployed to Somalia in July, Ms. Bangura said, to work alongside the police and the military to assess their needs in the fields of training and prosecution.

“I want to offer the support of my office in helping the Government achieve its stated goals of building an equitable society in which human rights are respected and communities are free from sexual and gender-based violence,” she said.

Last month, Ms. Bangura and Secretary-General Ban Ki-moon both welcomed the decision by a Somali appeals court to overturn the one-year conviction of a woman who claimed to be raped by security forces. The journalist charged in connection with the case was also subsequently released.

Earlier today, the Special Representative spoke to the media, praising Somali journalists covering sexual violence in the country for their important role in raising awareness about the subject.

“Without a free press to investigate and shine a light on these issues so that people know what a devastating problem this is worldwide, we can never hope to eradicate this scourge,” she said.

Somalia, which has been affected by conflict for more than two decades, has recently made some significant political gains. It marked a political watershed last August when it swore in the first formal parliament and ended a nine-year transition period, followed by the appointments of a new President and a new Prime Minister. 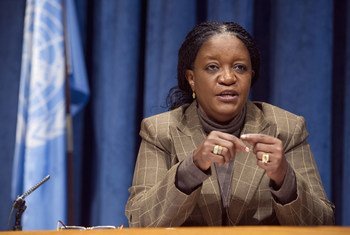 5 March 2013
Secretary-General Ban Ki-moon and his envoy dealing with sexual violence in conflict have welcomed the decision by a Somali appeals court to overturn the conviction of a woman who claimed to be raped by security forces, while voicing concern that the sentence against the journalist charged in connection with the case, while shortened, has been upheld.