Pointing to renewed rocket fire from Gaza into Israel and continued tensions over unresolved prisoner issues, a senior United Nations official today voiced concern about the volatile situation on the ground in the region.

“The United Nations condemns the indiscriminate firing of rockets into civilian areas and calls on Israel to act with restraint,” said a statement issued by Robert Serry, the UN Special Coordinator for the Middle East Peace Process.

“It is of paramount importance to refrain from violence in this tense atmosphere and for parties to work constructively in addressing the underlying issues,” said the statement, which referred to the firing of rockets from Gaza into Israel yesterday and this morning.

The latest rocket firings are another breach of the ceasefire agreement brokered by Egypt in November that brought an end to eight days of violence in Gaza and Israel.

Mr. Serry said the renewed violations of the ceasefire risk undermining the ‘understanding’ reached between Israel and Gaza in late November, and unravelling the gradual but tangible improvements achieved since then in the easing of the closure and the security situation in Gaza and southern Israel.

“The United Nations will continue to support Egyptian efforts to restore the calm and fully implement the ceasefire understanding as the only viable way to address the unsustainable situation in Gaza.”

Meanwhile, over 7,000 refugee families in Gaza will receive financial support from the UN Relief and Works Agency for Palestine Refugees in the Near East (UNRWA) to repair and reconstruct homes damaged during the November conflict, with the help of $15.6 million donation by the Saudi Fund for Development.

“We are very happy and pleased that only four months after the conflict and the damage or destruction of these shelters, we are able to distribute the cash subsidies to the affected 7,000 refugee families,” said Robert Turner, Director of UNRWA operations in Gaza.

“We have never before been able to provide this scale of support for war-damaged refugees’ shelters in such a short time. We are very thankful for this quick and generous donation by the Saudi Fund for Development.” 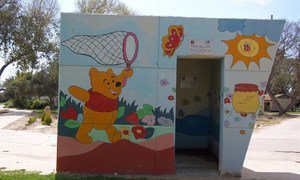 The United Nations today urged restraint by all parties following rocket fire from Gaze into civilian areas in southern Israel.