United Nations officials in Iraq today strongly condemned a wave of attacks across Baghdad that targeted journalists and media facilities, while urging Iraqi authorities to bolster protections for media professionals across the country.

“Assaults against media organizations or journalists are unacceptable under any circumstances,” declared Martin Kobler, the Secretary-General’s Special Representative and head of the UN Assistance Mission for Iraq (UNAMI), in a press release.

On 1 April, gunmen reportedly forced their way into the Baghdad offices of four independent newspapers attacking and beating employees, in what is the latest episode of targeted violence in the Iraqi capital. According to the UN Educational, Scientific and Cultural Organization (UNESCO), the country remains one of the most dangerous for journalists.

In his statement, Mr. Kobler called on the Iraqi Government “to ensure that media professionals are protected against all forms of intimidation and violence because of their opinions or thoughts.”

Adding her voice in condemning the violence against journalists, UNESCO’s Director in Iraq, Louise Haxthausen, expressed her “deep concern” over what she said was “the dangerous impact of such incidents on press freedom and freedom of expression.”

“Freedom of expression is a crucial element for establishing true democracy and building sustainable peace in Iraq,” Ms. Haxthausen stated.

In addition, the UNESCO official called on Iraqi authorities to bring justice and prosecute those involved in the attacks.

Yesterday’s attacks against Iraqi journalists come on the heels of a growing trend of violence across the country, including a series of coordinated, sectarian attacks on several Husseiniyas – which are places of religious significance for Shia Muslims – in Baghdad and the northern city of Kirkuk that killed and injured dozens last week.

During a trip to Kirkuk today, Mr. Kobler visited the city’s Al-Rasul Al-A’tham Husseiniya and met with cleric Mushin Al-Battat, who was wounded in last-week’s attack.

“This is a visit of solidarity with the people of Kirkuk,” the UN envoy stated, as he urged political leaders to engage in “inclusive dialogue to resolve their difference and defuse sectarian tensions.”

Mr. Kobler also met with the Governor of Kirkuk, Najmuddin Omar Karim, with whom he discussed political developments in the area.

Turning to the issue of Iraq’s democratic institutions, Mr. Kobler reiterated the UN’s support for the country’s electoral body, the Independent High Electoral Commission (IHEC), ahead of the upcoming Governorate Council elections.

“I encourage the IHEC to maintain its independence, transparency and credibility, in order to secure the trust of the voters,” he said in a news release, following a meeting with IHEC members.

Last month, reports suggested that the elections were plagued by security concerns prompting possible delays in the Anbar and Ninewa provinces. At today’s meeting, however, the IHEC assured the UN envoy that it was ready to conduct the elections in all 14 provinces on 20 April, according to Mr. Kobler’s office.

While addressing security and democracy-related issues, the Special Representative also voiced “deep concern” over the spate of executions conducted by Iraqi authorities – the latest taking place on 1 April.

Iraq, which retains the death penalty for a large number of crimes, executed 70 people in the first six months of 2012, compared to 67 for the whole of 2011, and 18 in 2010, according to a recently-published report, produced by UNAMI.

In a press statement released today, Mr. Kobler renewed his call for the Iraqi Government to immediately suspend all pending death sentences and “issue a public and permanent moratorium on the use of the death penalty.” 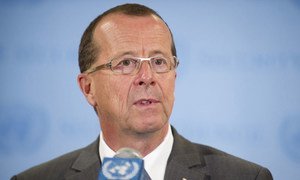 The United Nations envoy to Iraq today strongly condemned the wave of coordinated car bomb attacks and shooting that killed and injured dozens of civilians in several areas of Baghdad, the capital.