UN Photo/Rick Bajornas
Secretary-General Ban Ki-moon inspects Military Honour Guard of San Marino after receiving the Honour of the Knight of Grand Cross of the Equestrian Order of Saint Agatha.

31 March 2013
Secretary-General Ban Ki-moon today kicked off a five-nation tour of Europe with a visit to San Marino which he praised for its commitment to peace, democracy and the rule of law around the world.

Secretary-General Ban Ki-moon today kicked off a five-nation tour of Europe with a visit to San Marino which he praised for its commitment to peace, democracy and the rule of law around the world.

“Although this country is small, your importance to the United Nations stands as tall as Mount Titano,” the Secretary-General told the country's highest officials, the two Captains Regent, in reference to the country's 739 meter UNESCO World Heritage Site.

San Marino is the third smallest country in Europe after the Vatican City and Monaco which Mr. Ban will visit later this week.

In today's meeting with the Captains Regent, Teodoro Lonfernini and Denise Bronzetti, Mr. Ban said that San Marino has important lessons for the international community given the peace and harmony within its borders and its neighbours, earning it the nickname 'La Serenissima Repubblica di San Marino' or the 'Most Serene Republic of San Marino.'

Mr. Ban also noted that the country accepted five times as many refugees as its population during the Second World War, and praised its emphasis on protecting human rights.

The head of the Organization also compared the UN's priorities of advancing towards three major goals - peace, development and human rights - with the three towers of San Marino located on the peaks of Mount Titano.

“San Marino can contribute to advancing the goals of the United Nations,” said Mr. Ban. “I look forward to an even stronger partnership as we join forces to build a better future.”

Tomorrow, Mr. Ban will take part in the inauguration ceremony for the newly elected Captains Regent, who rotate every six months as the heads of state.

Earlier in the day, Mr. Ban met with the Minister of Foreign Affairs of San Marino, Pasquale Valentini. During the meeting, they discussed the role and contribution of San Marino to UN's work, particularly in the areas of sustainable development and global economic governance.

They also exchanged views on the global economy and other topics of mutual concern, including women's empowerment.

During this visit to Europe, Mr. Ban will focus on issues such as the anti-poverty targets known as the Millennium Development Goals (MDGs), chemical weapons and UN tribunals.

Mr. Ban travels next to Andorra and Monaco, two countries that are commemorating the 20th anniversary of their membership in the UN. He will meet with the Prime Minister of Andorra and the President of the Parliament, before addressing the members of the Parliament. In Monaco, he will meet with Price Albert, the Minister of State, and other Government officials. He will also address the Constitutional Bodies of Monaco.

The head of the UN then travels to Spain, where on Thursday he will meet with the Crown Prince and the Prime Minister, and launch an event for the 1,000 days of action for the MDGs ahead of the 2015 deadline for their achievement.

Mr. Ban will also travel to the Netherlands where he will meet with Queen Beatrix and Dutch Government ministers. He will also attend the opening session of the 3rd Review Conference of the Chemical Weapons Convention. 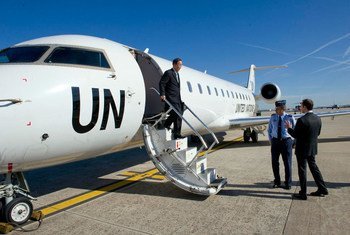 27 March 2013
Secretary-General Ban Ki-moon will depart New York on Saturday for a five-nation European tour during which he will focus on issues such as the anti-poverty targets known as the Millennium Development Goals (MDGs), chemical weapons and United Nations tribunals.