Secretary-General Ban Ki-moon today congratulated Uhuru Kenyatta on his election as President of Kenya, and urged Kenyans to remain calm following a decision by the country's top court that settled the ballot win.

Secretary-General Ban Ki-moon today congratulated Uhuru Kenyatta on his election as President of Kenya, and urged Kenyans to remain calm following a decision by the country's top court that settled the ballot win.

In a separate phone conversation, the Secretary-General commended Mr. Kenyatta's rival, Prime Minister Raila Odinga, for participating in the political process and accepting the decision of the Kenyan Supreme Court.

Mr. Ban reiterated his congratulations to Kenyans on holding “peaceful, credible elections that should strengthen Kenya's democracy and its unity.”

He pledged the UN's strong support for the country, and wished the newly-elected government and people of Kenya “every success” in meeting the many challenges and opportunities they face.

Earlier on Saturday, the Kenyan Supreme Court upheld Mr. Kenyatta's victory with approximately 50.1 per cent of the vote. Mr. Odinga, who received 43.3 per cent, had challenged the result on grounds that it was flawed and marred by technical challenges. He has since said that he will abide with the judgement.

Mr. Ban and the Office of the UN High Commissioner for Human Rights (UNHCR) have praised the 4 March election for being peaceful and characterized by an absence of any systematic violations of human rights.

The election was the first presidential polls in Kenya since the December 2007 vote, which was followed by post-election violence in which more than 1,100 people were killed, 3,500 injured and up to 600,000 forcibly displaced. 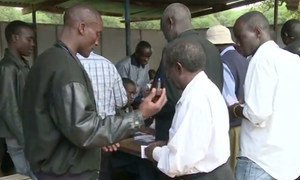