The trial chamber of the United Nations-backed court in Cambodia that is trying those accused of genocide and crimes against humanity today ruled that Nuon Chea, also knows as “Brother Number Two” to Khmer Rouge leader Pol Pot, is fit for trial.

Mr. Noun is before the Extraordinary Chambers in the Courts of Cambodia (ECCC), a mixed court set up under a 2003 agreement signed by the UN and the Government, on charges of genocide and crimes against humanity committed during the Khmer Rouge regime in the late 1970s.

“Notwithstanding the advanced age and frailty of the accused, Nuon Chea, and the accused's precarious physical health, the recent report and testimony of the court-appointed medical experts clearly indicate that the accused remains capable of meaningful participation in his own defence,” the president of the court, Nil Nonn, said through an English translator.

Mr. Noun waived his right to be present in court on grounds of health reasons. He is reportedly 86-years-old and suffers from heart disease, among other ailments.

Nearly two million people are thought to have died during the Khmer Rouge regime between 1975 and 1979.

Out of five Khmer Rouge leaders indicted by the ECCC in 2007, the court has so far completed just one case, sentencing former prison chief Kaing Guek Eav, whose alias is 'Duch', to life in jail.

In addition, witness hearings in Case 002/01 against Mr. Nuon and Khieu Samphan will resume on 8 April, the Court announced. 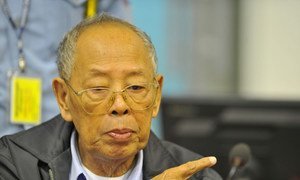 The trial chamber of the United Nations-backed court in Cambodia that is trying those accused of genocide and crimes against humanity today terminated the proceedings against former foreign minister Ieng Sary, who died this morning after being hospitalized since 4 March.