UN Photo/JC McIlwaine
Security Council votes to authorize the deployment of an intervention force to target armed groups in the Democratic Republic of the Congo (DRC).
28 March 2013

The Security Council today authorized the deployment of an intervention brigade within the current United Nations peacekeeping operation in the Democratic Republic of the Congo (DRC) to address imminent threats to peace and security.

The intervention brigade will carry out targeted offensive operations, with or without the Congolese national army, against armed groups that threaten peace in the eastern part of DRC – a region that is prone to cycles of violence and consequent humanitarian suffering.

The objectives of the new force – which will be based in North Kivu province in eastern DRC and total 3,069 peacekeepers – are to neutralize armed groups, reduce the threat they posed to State authority and civilian security and make space for stabilization activities.

The brigade is established within the UN Organization Stabilization Mission in DRC (MONUSCO) for an initial period of one year, as set out in the resolution adopted unanimously today by the Council, which also extended the mission until 31 March 2014.

Resolution 2098 also provides a new mandate for MONUSCO, by which it will support Congolese authorities to protect civilians, neutralize armed groups, and implement key reforms to consolidate peace in the country, particularly in the area of security sector reform and rule of law.

Secretary-General Ban Ki-moon welcomed the resolution, “which sets out a new, comprehensive approach aimed at addressing the root causes of instability in the eastern DRC and the Great Lakes region,” his spokesperson said in a statement.

“He remains personally committed to helping bring peace and stability to the people of the DRC and the Great Lakes region and will keep working to ensure this remains a top priority for the international community,” the statement added.

Also hailing the resolution was Under-Secretary-General for Peacekeeping Operations Hervé Ladsous, who told reporters that the text reflected the shared desire of the international community to comprehensively address the root causes of the terrible cycle of violence witnessed in the DRC over nearly two decades.

“I do very much think that today could be a significant turning point in the handling of the crisis that for many years the DRC has experienced,” he said. “And at the end of the day, it is about putting an end to the suffering of millions of people.”

The newly-authorized brigade is designed to further support the political objectives of the Peace, Security and Cooperation Framework for the DRC and the region – a peace deal signed last month in Addis Ababa, Ethiopia.

The Council demanded that the signatories of the Framework fully implement their commitments in good faith, and called on the newly designated Special Envoy for the Great Lakes Region, Mary Robinson, to lead, coordinate and assess the implementation of these commitments. 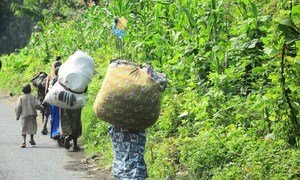 Secretary-General Ban Ki-moon today called on the Security Council to authorize the deployment of a special force within the current United Nations peacekeeping operation in the Democratic Republic of the Congo (DRC) to address imminent threats to peace and security.