A United Nations human rights panel visiting Brazil has raised concerns regarding what it called an “excessive use” of policies leading to the deprivation of liberty as well as a lack of effective legal assistance to persons arrested or detained in the South American nation.

Marking the end of its first official visit to Brazil, which included stopovers in Campo Grande, Fortaleza, Rio de Janeiro, Sao Paulo and the capital, Brasilia, the UN Working Group on Arbitrary Detention pursued allegations of arbitrary deprivation of liberty in various detention facilities throughout the country, including prisons, police stations, detention centres for migrants and psychiatric institutions.

“There is a culture of using deprivation of liberty as the norm and not as an exceptional measure reserved for serious offences as required by international human rights standards,” stated Roberto Garretón, one of the two members of the visiting delegation.

“In the majority of criminal cases, alternative measures to detention were not applied even in cases of minor offences,” he continued.

A news release issued by the panel states that Brazil currently has one of the highest prison populations in the world with around 550,000 persons, almost half of whom are in pre-trial detention.

In addition, the majority of the Brazilian prison population is poor and cannot afford effective legal assistance, according to the experts, who also voiced concern that States such as Santa Catalina, Parana, and Goiania had no public defenders at all.

“In a country where the majority of those in prison are poor and cannot afford lawyers of their choice, it is extremely worrying that there is not enough legal assistance available to those who need it,” Mr. Garretón added.

Vladimir Tochilovsky, who accompanied Mr. Garretón on the 10-day trip to Brazil, also pointed to the “serious problem” of lengthy pre-trial detention, while calling on authorities to “rigorously protect” the right to a fair and prompt trial for those detained.

“We found numerous cases where detainees were arrested, brought into detention and had to wait for months to see a public defender,” Mr. Tochilovsky said. “Even worse, some have waited years before they could get a trial and find out what the charges against them were.”

Mr. Garretón and Mr. Tochilovsky also expressed serious concern regarding the arrests and compulsory confinement of drug addicts who they felt were being explicitly targeted as part of an alleged “clean up” campaign ahead of the 2014 FIFA World Cup and 2016 Summer Olympic Games – both of which Brazil will host.

♦ Receive daily updates directly in your inbox - Subscribe here to a topic.
♦ Download the UN News app for your iOS or Android devices.
Arbitrary Detention

UN group on arbitrary detention concerned over practices in Germany 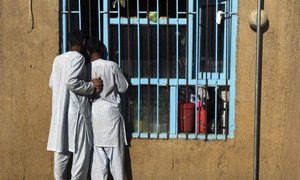 A United Nations expert human rights panel has voiced concern about the right to security impinging on the right to be free from arbitrary detention in El Salvador, as well as extreme overcrowding in prisons and police facilities in the Central American nation.