The head of the United Nations agency tasked with defending press freedom today denounced the recent murder of Somali radio journalist Rahma Abdulkadir and called for an investigation into the crime.

“I condemn the murder of Rahma Abdulkadir. Her name joins a long list of journalists who have lost their lives in Somalia,” said Irina Bokova, the Director-General of the UN Educational, Scientific and Cultural Organization (UNESCO).

“Media professionals must be able to work in secure conditions to fulfil their mission. Impunity for crimes against them must not be tolerated; it increases their vulnerability and compromises freedom of expression for all,” she added.

Ms. Abdulkadir, 25, worked for privately-owned Abduwaq radio. She was reportedly shot and killed by unknown attackers in the capital, Mogadishu, on 24 March.

The attack was condemned earlier this week by the Secretary-General’s Special Representative for Somalia, Augustine Mahiga, who called for an end to such “senseless” violence.

“Somalia continues to be one of the most dangerous places in the world for journalists to operate. This negative picture needs to change,” Mr. Mahiga said, calling on the recently-formed Independent Task Force on Human Rights and law enforcement bodies to ensure that the perpetrators are brought swiftly to justice. 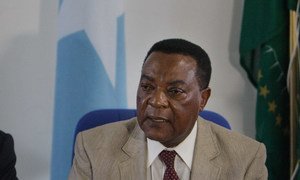 The United Nations envoy in Somalia today expressed shock and sadness at the killing of a female radio journalist and called on the Government to bring those responsible to justice.