27 March 2013
Insecticide-treated mosquito and fly nets encircling livestock pens in small farms in western Kenya are proving to be an effective means of killing disease-carrying pests and boosting milk yields, the United Nations today reported, as well as contributing to fewer people being bitten at home.

“The nets are environmentally safe and have drastically cut the number of flies, mosquitoes and other disease-transmitting insect vectors by close to 90 per cent,” the UN Food and Agriculture Organization (FAO) said in a statement, referring to a project in Kisii, Kenya, in the country’s western highlands.

The nets have also cut down the cases of mastitis, a bacterial disease that can be spread by flies as well as poor hygiene during milking, according to FAO.

In addition, the Rome-based UN agency said that preliminary findings reported a 40 per cent decrease in cases of malaria in the farmers’ homes.

In countries like Kenya, where smallholders owning just one or a few cows care for 80 per cent of the dairy animals and produce more than three-quarters of the country's milk, the loss of an animal can devastate a family economically.

“We were treating animals that were already sick, but they kept dying. So we needed to look at the real culprits – the insects that transmit disease in the first place,” said Burkhard Bauer, an independent Senior Scientific Advisor of the Free University of Berlin working on the FAO project.

A farmer in the Kisii area, Mary Munyega Nyandeo, told FAO that the nets have improved the quantity of milk she gets, putting more money in her pocket.

“I used to milk around 2 litres of milk, but since the nets were brought and the flies disappeared, I now milk around 4 or 5 litres a day, so I make profit,” Ms. Nyandeo said.

In Ghana, similar nets are used to protect smallholder pig farms. A third pilot project is getting underway in Burkina Faso.

The nets are ecologically safe and efficient since the animals do not have to be coated repeatedly with insecticides.

“The insecticide used is made from the same chemicals used in pet flea collars,” said Raffaele Mattioli, Senior Officer with FAO’s Animal Health Service in Rome. 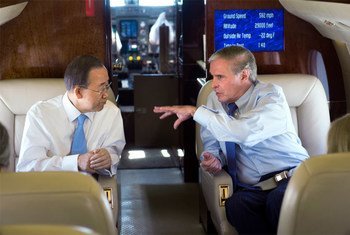 1 March 2013
Secretary-General Ban Ki-moon has tasked Ray Chambers, who has served as his Special Envoy for Malaria since 2008, with promoting and securing greater investment to achieve the health-related targets within the Millennium Development Goals (MDGs).