Secretary-General Ban Ki-moon and the Foreign Ministers of Argentina, Cuba, Peru and Uruguay discussed the issue of the Falkland Islands (Malvinas) during their meeting today at United Nations Headquarters in New York.

The Governments of Argentina and the United Kingdom have been engaged in a dispute concerning the sovereignty of the islands, located in the south Atlantic Ocean.

According to a read-out of the meeting, the Secretary-General acknowledged the strong regional support on this issue and reiterated that his good offices to resolve this dispute remain available, if the parties are willing to engage.

♦ Receive daily updates directly in your inbox - Subscribe here to a topic.
♦ Download the UN News app for your iOS or Android devices.
falkland 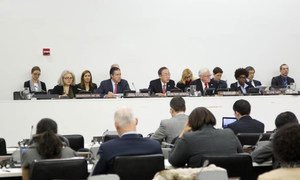