Secretary-General Ban Ki-moon today discussed the fragile security and humanitarian situation in eastern Democratic Republic of the Congo (DRC) in a meeting with the country’s Foreign Minister, Raymond Tshibanda N'tungamulongo.

Secretary-General Ban Ki-moon today discussed the fragile security and humanitarian situation in eastern Democratic Republic of the Congo (DRC) in a meeting with the country’s Foreign Minister, Raymond Tshibanda N'tungamulongo.

The two men, who met at UN Headquarters, agreed that the upcoming Security Council resolution on the DRC should strengthen the role of the UN peacekeeping mission in the country (MONUSCO) and endorse the Secretary-General’s comprehensive approach to addressing the root causes of instability in the Great Lakes region.

Mr. Ban, who also spoke by phone today to President Joseph Kabila of DRC, has called on the Council to authorize the deployment of a special force within MONUSCO that would have the ability to conduct, with or without the Congolese national army, offensive operations against all armed groups that threaten peace in the eastern part of the country.

Fighting resumed in eastern DRC in April of last year, when the M23 – made up of former national army troops – mutinied. Since then, clashes between M23 fighters and the DRC’s national army (FARDC) have displaced nearly a million people in North Kivu province, and in February, more than 300,000 people were displaced by additional fighting in the south-eastern province of Katanga.

During their meeting, Mr. Ban and Mr. Tshibanda N’tungamulongo also welcomed the recent transfer of former Congolese warlord Bosco Ntaganda to the International Criminal Court (ICC) and discussed the implementation of the Peace, Security and Cooperation Framework for the DRC.

Last week, Mr. Ban appointed former Irish president Mary Robinson as his new Special Envoy for the Great Lakes region. She will support the implementation of the Framework, an accord which aims to stabilize the situation in DRC. 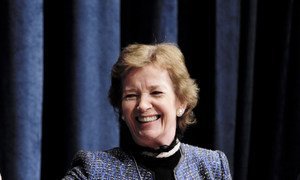