ICC-CPI
Bosco Ntaganda during his initial appearance before the International Criminal Court in March 2013.
26 March 2013

The International Criminal Court (ICC) set 23 September as the start date for the confirmation of charges hearing for Congolese rebel leader Bosco Ntaganda, who made his first appearance before the tribunal today.

Mr. Ntaganda faces several counts of war crimes and crimes against humanity – including rape, murder and the recruitment of children – allegedly committed in Ituri province of the Democratic Republic of the Congo (DRC) between 2002 and 2003.

A confirmation of charges hearing is held to determine whether there is sufficient evidence to establish substantial grounds to believe that the person committed each of the crimes charged, according to a news release issued by the Court, which is based in The Hague.

If the charges are confirmed, the Court’s pre-trial chamber commits the case for trial before a trial chamber, which will conduct the subsequent phase of the proceedings, namely the trial.

Mr. Ntaganda surrendered himself voluntarily to the ICC’s custody on 22 March, after turning himself in to the United States Embassy in Rwanda on 18 March.

DRC is one of seven situations currently under investigation by the ICC. The others are northern Uganda, the Darfur region of Sudan, the Central African Republic (CAR), Kenya, and Côte d’Ivoire. 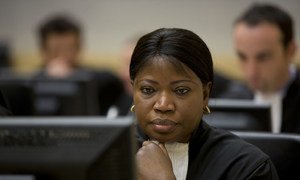 The Prosecutor of the International Criminal Court (ICC) has welcomed the news of the transfer of Congolese warlord Bosco Ntaganda to The Hague, where he faces charges for a range of alleged war crimes, including rape, murder and the recruitment of children.