IRIN/Nancy Palus
Passers-by on a motorcycle wave to ‘dozos’ posted along the road between Man and Duékoué in western Côte d’Ivoire.
25 March 2013

The United Nations peacekeeping missions in Côte d’Ivoire and neighbouring Liberia have been reinforcing their patrols after an attack by armed elements in Petit Guiglo, in Côte d’Ivoire’s western region.

The UN Operation in Côte d’Ivoire (UNOCI) has condemned the 23 March attack in which at least two civilians were killed and a traditional hunter known as ‘dozo’ injured. Three of the assailants were reportedly killed in the fighting, including a well-known local militia leader named Oulai Tako. In addition, two soldiers from the Côte d’Ivoire national army were injured.

The assailants reportedly first targeted an army position in Petit Guiglo, before moving to the village itself.

UNOCI has been supporting the reunification and stabilization of the West African country, split by civil war in 2002. A 2010 presidential election, meant to be a culminating point in the peace process, resulted in months of violence when former President Laurent Gbagbo refused to step down after losing to Alassane Ouattara, who finally took office in May 2011.

In recent days, UNOCI peacekeepers have deployed to Petit Guiglo. They are supporting Ivorian forces and protecting civilians through ground and air patrols.

UNOCI is liaising with the UN mission in neighbouring Liberia (UNMIL), which has also reinforced its patrols of the border. 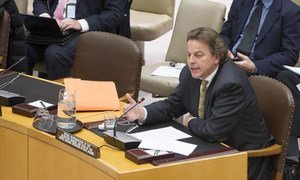