25 March 2013
Foreign direct investment (FDI) going into and out of the emerging economies of Brazil, Russia, India, China and South Africa – collectively known as BRICS – is mounting in global influence, according to a United Nations report released today.

The latest Global Investment Trends Monitor (GITM) shows that over the past decade, FDI going into BRICS has more than tripled, totaling $263 billion in 2012. This figure represents 20 per cent of world FDI flows, and is a significant increase considering it was only 6 per cent in 2000.

Meanwhile, investment from BRICS into other countries has climbed from $7 billion in 2000 to $126 billion in 2012, rising from 1 per cent of world flows to 9 per cent, with China and Russia accounting for the majority of these investments.

In particular, the report highlights that foreign investment from BRICS into Africa represented 25 per cent of Africa’s inflows last year, with most funds going to the manufacturing and services sectors.

While labour costs in Africa may not differ significantly from those in the firms’ home economies, the duty-free, quota-free access of African countries and China’s zero-tariff measures for African least developed countries (LDCs) have generated manufacturing investment.

Brazil, for example, has expanded its business in the new African ethanol industry in countries like Angola, Ghana and Mozambique; China is one of the top investing countries in LDCs such as Sudan and Zambia; an Indian company recently acquired an African mobile phone network; and Russian banks are expanding to countries such as Côte d’Ivoire and Nigeria.

The report notes that this growing relationship between BRICS and Africa is likely to be reinforced in the future due to the rapid economic growth and industrial upgrading currently taking place in BRICS countries.

“The rise of FDI in manufacturing, which has positive consequences for job creation and industrial growth, is becoming an important facet of South–South economic cooperation,” it says.

However, the main share of BRICS’ outward investment is still in developed economies, with 34 per cent of their stocks going to the European Union. The report notes that these investments are in large part driven by ‘market-seeking motives’ as well as mergers and acquisitions across borders.

The report, produced by the UN Conference on Trade and Development (UNCTAD), was released ahead of the 5th BRICS Summit which starts tomorrow in Durban, South Africa, and whose theme is “BRICS and Africa: Partnership for development, integration, and industrialization.” 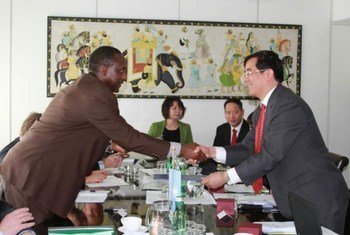 19 April 2012
The United Nations agency tasked with promoting industrial development and China today signed an agreement to expand cooperation in the field of multilateral environmental conventions and other areas of mutual interest.