United Nations officials today urged countries to strengthen their efforts to respond to drug-resistant strains of tuberculosis (TB) and increase funding to eliminate this disease.

United Nations officials today urged countries to strengthen their efforts to respond to drug-resistant strains of tuberculosis (TB) and increase funding to eliminate this deadly disease.

In his message marking World Tuberculosis Day, Secretary-General Ban Ki-moon said that while there has been much progress since the World Health Organization (WHO) declared TB a global health emergency two decades ago, there are still challenges to be met, mainly stopping the spread of multi-drug resistant TB, also known as MDR-TB, which threatens to reverse the gains achieved in past years.

“New diagnostics, new drugs and the promise of new vaccines have the potential to further accelerate progress against TB, which still kills 1.4 million people a year – more than any infectious disease other than AIDS. But two obstacles stand in the way,” Mr. Ban said.

“The first is the emergence of TB strains that fail to respond to first-line drugs […] the second is the need for funding.”

According to WHO, an estimated 8.7 million people developed TB and 1.4 million died from the disease in 2011.

Worldwide, an estimated 630,000 people are infected with MDR-TB, which is notoriously difficult to diagnose and costs at least 10 times more to treat than drug-sensitive TB.

“Low- and middle-income countries are already footing two-thirds of the bill for TB care and control,” Mr. Ban said. “ They rely on the international community to provide the remaining third.”

WHO Director-General Margaret Chan stressed that while curing MDR-TB is feasible, it takes 20 to 24 months of treatment with expensive and toxic drugs, some of which need to be administered by injection and some of which are in short supply.

“Despite recent success in shrinking the epidemic, the global TB burden remains enormous. MDR-TB has been detected in virtually every country that has looked for it,” Ms. Chan told a press briefing in Geneva on Thursday.

“The emergence of MDR-TB, at dramatic levels in some settings, is a signal that care and control measures have failed. When patients are given too little treatment, stop taking their medicines, or are treated with sub-standard medicines, only the weakest TB bacteria are killed.”

However, Ms. Chan warned that nearly 4 per cent of people newly ill with TB are resistant to multiple drugs right from the start, meaning that the disease was transmitted directly from one person to another.

“We are just treading water when we desperately need to scale up the MDR-TB response. What has been gained through impressive international collaboration can be so easily lost,” Ms. Chan said, adding that the funding gap for TB care and control is substantial.

Also on Thursday, WHO and the Global Fund to Fight AIDS, Tuberculosis and Malaria said $1.6 billion is needed to fill the funding gap in 118 low- and middle-income countries, the majority of which are located in Africa. These funds could enable full treatment for 17 million TB and MDR-TB patients, and save some 6 million lives in the next three years.

Observed annually on 24 March, World TB Day raises awareness about the global epidemic and efforts to eliminate a disease. Since WHO launched a global TB strategy in 1993, more than 50 million people have been successfully treated for this highly contagious disease, and 20 million lives saved. 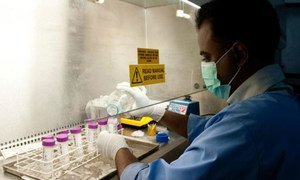 The United Nations health agency and the Global Fund to Fight AIDS, Tuberculosis and Malaria today said some $1.6 billion in international funding is needed every year to treat and prevent tuberculosis before drug-resistant strains of the disease spread widely.