“The growing impact of weather extremes cannot be ignored. Over the last 30 years natural disasters took the lives of over two million people and produced economic losses estimated at over 1.5 trillion dollars,” said the Secretary-General of the World Meteorological Organization (WMO), Michel Jarraud.

World Meteorological Day, observed on 23 March, celebrates the creation of WMO in 1950 to promote international cooperation in the field of weather, climate, water and other related sciences. This year's theme, “Watching the Weather to Protect Life and Property,” focuses on the crucial role that meteorological and water services play in alerting people to natural hazards such as floods, topical cyclones and droughts.

“Much more must, and can, be done to allay human suffering. Tropical cyclones, heavy rainfalls and floods, droughts and cold and heat waves affect the entire world, alerting us to some of the worst implications of growing climate variability and change,” Mr. Jarraud said. “Weather and climate early warnings and disaster risk reduction are central to any sustainable development.”

For more than 60 years, WMO has been the UN system's authoritative voice on the state and behaviour of the Earth's atmosphere, its interaction with the oceans, the climate it produces and the resulting distribution of water resources.

This year also marks 50 years of World Weather Watch programme, launched by WMO following a General Assembly request to investigate the potential of weather satellites as part of the agenda for the peaceful use of outer space.

The programme is considered to be an outstanding example of international cooperation through which countries share information for weather forecasting, and the foundation for more modern scientific insights in computing, telecommunications and satellites.

Because of advances in modeling techniques, scientists are now able to better understand the Earth's complex global weather and climate system, and are starting to make seasonal and longer-term forecasts.

“More than ever the world needs global cooperation to promote and coordinate the provision of better and longer-term weather and climate forecasts and early warnings to protect life and property,” Mr. Jarraud said. “The 2013 World Meteorological Day offers an occasion to reinforce this message and to contribute to addressing the challenges of the 21st century.”

To mark the Day, WMO hosted a forum this week in Geneva featuring leading experts from around the world who discussed the evolution of coordinated climate and weather observations, telecommunications and meteorological forecasts.

♦ Receive daily updates directly in your inbox - Subscribe here to a topic.
♦ Download the UN News app for your iOS or Android devices.
natural disasters 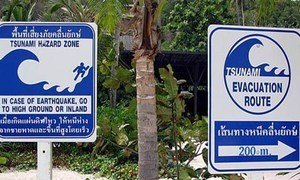