The United Nations will turn off the lights for one hour at its Headquarters in New York and other facilities around the world tomorrow in observance of “Earth Hour,” an annual global event to raise awareness on the need to take action on climate change through more sustainable energy consumption.

In the lead up to the Hour, Secretary-General Ban Ki-moon underlined the fact that governments, business and civil society all have a role to play in coming up with common sense answers for a cleaner, greener world.

“We participate with an undimmed determination to take action on climate change,” said Mr. Ban, who in September launched an initiative to achieve universal and sustainable access to energy around the world.

Since his first year in office in 2007, Mr. Ban has urged the UN system to “lead by example” in reducing its carbon footprint. In New York, the UN is now buying all the electricity for the iconic Secretariat Building from renewable energy sources.

The switch to renewables, currently 100 per cent wind energy, has been done by purchasing Renewable Energy Certificates, a tradable certificate issued when electricity is generated and delivered to the grid from a qualifying renewable energy source.

Overall, the $1.9 billion renovation of the Secretariat aims to reduce energy consumption by 50 per cent and carbon emissions by 45 per cent. Action to reduce the UN’s impact on the environment is also being taken in UN offices throughout the world.

This is the fifth time that the UN will join many governments around the world that are participating in the Earth Hour event. In 2012, more than 7,000 cities and towns in 152 countries switched off their lights to show support for action on climate change and sustainable living.

Earth Hour was launched in 2007 in Australia by the World Wildlife Federation (WWF), the global conservation organization, which calls for people, organizations and cities to turn off their non-essential lights for one hour starting at 8:30 p.m. local time.

The Earth Hour event will take place one week after the vernal equinox – when night and day are the same duration in both hemispheres – which ensures that it will be night time for all people, wherever they are, at 8:30 in the evening.

♦ Receive daily updates directly in your inbox - Subscribe here to a topic.
♦ Download the UN News app for your iOS or Android devices.
sustainable|energy 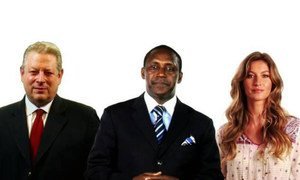