A senior United Nations official has welcomed the establishment by the Human Rights Council of a commission of inquiry into alleged abuses in the Democratic People's Republic of Korea (DPRK), one of several decisions taken by the 47-member body as it wrapped up its current session.

“We see this as a major breakthrough, and it was good to see that it was adopted by consensus,” Rupert Colville, the spokesperson for the High Commissioner for Human Rights, told reporters in Geneva, referring to the resolution that was acted on yesterday.

High Commissioner Navi Pillay and several independent UN human rights experts had been calling for an inquiry into serious crimes that have been persistent in DPRK for decades.

“That is no longer the case now [that] the Human Rights Council has taken this very significant step of establishing a commission of inquiry,” said Mr. Colville. “As the High Commissioner pointed out, the deplorable situation in DPRK in one way or another affects almost the entire population and has no parallel anywhere else in the world.”

He added that the existing Special Rapporteur on the situation of human rights in DPRK will be one of the three members of the commission of inquiry, with the other two appointed by the President of the Human Rights Council.

The resolution on the DPRK was one of 39 texts adopted during the Council's four-week session in Geneva, which opened with a high-level segment from 25 to 28 February.

Secretary-General Ban Ki-moon also welcomed the resolution, saying it “reflects the level of concern in the international community about the persisting deterioration in the human rights situation in the country.”

He also urged the DPRK and all others to fully cooperate with the Council, its Commission of Inquiry and Ms. Pillay.

Among its other decisions, the Council – the UN's top human rights body – established the post of an independent expert on Mali, and called on the Government of Sri Lanka to conduct an independent and credible investigation into alleged human rights violations.

The Council also renewed the mandates of a number of special procedures, including the mandates of the Special Rapporteurs on countering terrorism, on the right to food, on freedom of religion or belief, and on the situations of human rights in DPRK, Myanmar, Iran and Syria, as well as the Independent Expert on Haiti.

The next regular session of the Council is scheduled to be held in June. 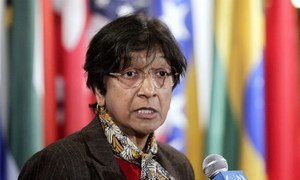 A top United Nations official today condemned the “deplorable” human rights situation in the Democratic People’s Republic of Korea (DPRK) and urged the international community to launch an inquiry into serious crimes that have been persistent in the country for decades.