22 March 2013
Despite some achievements in improving living standards for children, Guatemala must increase access to nutrition as well as to justice for its youngest citizens or leave an entire generation at risk, the head of the United Nations Children’s Fund (UNICEF) warned today.

In a press statement released during his visit to the Central American nation’s capital, Guatemala City, UNICEF Executive Director Anthony Lake voiced concern for the welfare of an estimated 5,800 children still languishing in institutions throughout the country with little or no access to their families or alternative care.

“All children need the love and nurturing only a family can give no matter how good and caring the institution. And while it’s encouraging to see the signs of progress in both nutrition and protection, if we fail to sustain it, we leave a generation at risk,” Mr. Lake declared.

“We cannot let the immensity of the problems discourage us from making progress – nor let the progress create complacency. We must accelerate it,” he added.

Mr. Lake, however, pointed to “encouraging signs of progress,” including the creation of special courts to hear cases of violence and abuse in high crime regions of the country. Moreover, he noted that an increasing number of children were leaving institutions and being reunited with their families.

“There is greater agreement to resolve adoption cases with clear targets and to prevent children being institutionalized,” a news release issued by UNICEF confirmed.

During his trip to Guatemala, Mr. Lake also visited the city of Totonicapán, where he witnessed first hand ongoing efforts to reduce the country’s levels of malnutrition. According to UNICEF statistics, Guatemala has the sixth-highest malnutrition rates in the world, with 49 per cent of children under five chronically malnourished or stunted.

In meetings with the President of Guatemala, Otto Pérez Molina, the Executive Director praised the country’s efforts to reduce its chronic under-nutrition by 10 per cent by 2015, adding that the UN would help the country accelerate its progress and build “robust child protection systems.”

“Food alone is not a guarantee to being well nourished,” said Mr. Lake.

“Good nutrition lies at the heart of progress. Simple, cost-effective packages like breastfeeding, micro-nutrients and hand-washing can unleash the potential of children to learn and earn and for a nation to succeed.” 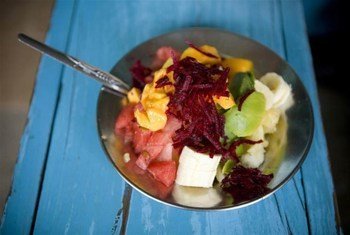 10 April 2012
High-level officials tasked by Secretary-General Ban Ki-moon with promoting good nutrition have today agreed to focus on ensuring that support to countries produces tangible results, and that resources for country-led actions are coordinated, aligned, transparent and accountable.