People want the United Nations to address challenges such as environmental degradation, unemployment and violence, according to initial findings released today from a global multi-media survey aimed at bringing the concerns of regular people to policymakers as they shape the development agenda for after 2015, the deadline to reach the Millennium Development Goals.

The process includes participations from 60 UN agencies, funds and programmes, and involves almost 100 national consultations in Member States, thematic discussions, surveys and online survey ‘My World’ where people are asked, “What kind of World do you Want?”

Thousands of people have logged into the related website, WorldWeWant2015.org, which currently has more than 5,700 suggested priorities ranging from ‘financial inclusion’ to ‘an honest and responsive government’ and youth empowerment.

“We are reinventing the way decisions will be made at the global level,” said Olav Kjørven, Director of the Bureau for Development Policy at the UN Development Programme (UNDP). He is also a co-chair of a UN Task Team working on a future development agenda, referred to as “the post-2015 agenda.”

“People want to have a say in determining what kind of world they are going to live in and we are providing that opportunity by using digital media as well as door-to-door interviewers,” Mr. Kjørven added in a statement.

More than 200,000 people from 189 countries – including groups such as women, indigenous communities, youth and people with disabilities – participated through a mix of digital media, mobile phone applications, conferences and paper surveys.

Among the trends identified in the initial report ‘The Global Conversation Begins’, people prioritized accelerating progress to meet the goals to be achieved by 2015 and to adapt the MDGs to contemporary challenges, such as the impact of globalization.

Participants also expressed an interest in being involved in both setting the future development agenda, and in monitoring its implementation.

“There is huge energy and appetite to engage in these global consultations,” said John Hendra, co-chair of the UN Development Group MDG Taskforce and Deputy Executive Director of UN Women, which co-led the discussions on how to address inequalities with the UN Children’s Fund (UNICEF).

“Of course this report is only preliminary, but it’s already clear that inequality is a universal concern, and in that context, people are calling for gender equality and women's rights to be at the centre of the post-2015 agenda,” added Mr. Hendra.

The initial report has been presented to more than 100 representatives of Member States.

Later this month, the report will also be presented to the High-level Panel on the Post-2015 Development Agenda – chaired by United Kingdom Prime Minister David Cameron and Presidents Ellen Johnson-Sirleaf of Liberia and Susilo Yudhoyono of Indonesia – at the panel’s meeting in Bali.

The final document will be shared with Secretary-General Ban Ki-moon and heads of State and government attending the 2013 UN General Assembly, and the Open Working Group on Sustainable Development Goals. 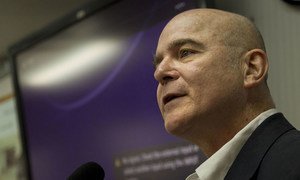 Haiti needs to develop a coordinated plan of action on human rights and a framework on the rule of law, an independent United Nations expert has said, noting that while positive changes are coming very slowly, there is a strong expectation from Haitians to see improvements.