UN Photo/Mark Garten
Secretary-General Ban Ki-moon announcing that he is establishing a UN investigation mission on the possible use of chemical weapons in Syria.

21 March 2013
Secretary-General Ban Ki-Moon today said that the United Nations will launch an independent investigation into allegations of the possible use of chemical weapons in Syria, after receiving a formal request from the country’s Government.

“The investigation mission is to look into the specific incident brought to my attention by the Syrian Government,” the Secretary-General told journalists in New York this morning.

“I am, of course, aware that there are other allegations of similar cases involving the reported use of chemical weapons,” he added.

Mr. Ban said the investigation will start “as soon as practically possible.”

He said his senior advisers are working on the modalities in close consultation with the relevant bodies, including the Organization for the Prohibition of Chemical Weapons (OPCW) and the World Health Organization (WHO).

Detailed issues such as overall mandate, mission composition, and operational conditions, including safety and security, would be considered in those discussions, he said.

“In discharging its mandate of an investigation mission, full cooperation from all parties will be essential,” Mr. Ban said, stressing that “this includes unfettered access.”

The UN received a formal request from Syrian authorities yesterday for a “specialized, impartial and independent mission” to investigate the alleged use of chemical weapons.

Speaking to reporters at UN Headquarters yesterday afternoon, Syrian Ambassador Bashar Ja’afari said that he wanted a probe to look into the use of those weapons by “armed terrorist groups” in an attack on the village of Khan al-Assal on the outskirts of Aleppo on 19 March.

If requested by a Member State, Mr. Ban said he has a mandate to consider conducting an investigation on alleged uses of chemical, biological and toxin weapons pursuant to General Assembly resolution 42/37 C of 1987 and reaffirm by Security Council resolution 620 of 1988.

“My announcement should serve as an unequivocal reminder that the use of chemical weapons is a crime against humanity,” Mr. Ban reiterated in his press encounter.

He also repeated that a political solution is needed in Syria, and called on the regional and international community to find unity and support the efforts of his Joint Special Representative, Lakhdar Brahimi.

Since the uprising against President al-Assad began in March 2011, more than 70,000 people, mostly civilians, have been killed and more than three million displaced. In addition, some 1.1 million people have taken refuge in neighbouring countries. 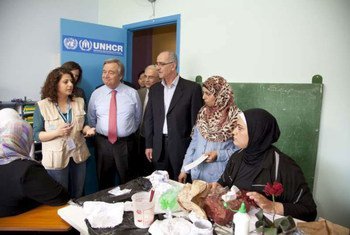 20 March 2013
The top United Nations refugee official has warned that Syria’s worsening humanitarian crisis risks overwhelming the international community’s capacity to respond, and that some aid agencies could run out of money for relief activities as early as the end of this month.