Celebrating the International Day of Francophonie, or French language, top United Nations officials today pointed to the power of that language to bring peoples together and stressed the importance of linguistic diversity for understanding and respect between cultures.

“French draws its strength from the diversity of the peoples and cultures that share it and contribute daily to its enrichment and vibrancy,” Irina Bokova, Director-General of the UN Educational, Scientific and Cultural Organization (UNESCO), said in Paris.

“Today, International Francophonie Day, UNESCO celebrates the power of the French language in bringing peoples and cultures together, as a tool for mutual understanding and peace,” she added.

She said that UNESCO underlined the importance of linguistic diversity as a condition for sincere and authentic international cooperation, whereby each person’s thoughts can be expressed directly and accurately, without borrowing others’ words.

“This is an issue of equality and respect; it is also a matter of efficiency and clarity,” she said.

This evening in New York, Secretary-General Ban Ki-moon will participate in a celebration during which he will receive the Leopold Sear Senghor Medal, “le Grand Prix de la Francophonie,” awarded to the UN for its contribution to the development of the French language.

Mr. Ban is expected to pay tribute to the place of French in international cooperation, including the need for more French-speaking staff in UN peacekeeping operations for crucial dialogue with local populations.

International language days were introduced in the UN system in 2010 to celebrate multilingualism and cultural diversity in the six official languages of the Organization. Chinese is celebrated on 20 April, English on 23 April, Russian on 6 June, Spanish on 12 October, and Arabic on 18 December.

♦ Receive daily updates directly in your inbox - Subscribe here to a topic.
♦ Download the UN News app for your iOS or Android devices.
multilingualism

UN Committee on Information calls for greater emphasis on multilingualism 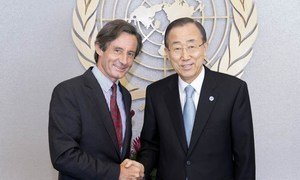