20 March 2013
A senior United Nations official today urged Nepal to rectify a decree that gives a truth and reconciliation commission the power to grant amnesty for serious human rights violations.

“Such amnesties would not only violate core principles under international law but would also weaken the foundation for a genuine and lasting peace in Nepal,” said UN High Commissioner for Human Rights Navi Pillay.

The 2006 peace accord that ended the conflict in Nepal had agreed to establish a truth and reconciliation commission to investigate human rights violations that occurred from 1996 to 2006, during which at least 13,000 people were killed and 1,300 went missing.

While there had been an agreement to establish such a commission, no law had been passed to do so until last week – part of a package to break a long-standing political deadlock and move the country towards fresh elections.

“An amnesty for those who committed serious human rights violations will deny the right of thousands of Nepalese to truth and justice. This will not provide a sustainable road to peace,” Ms. Pillay said.

The High Commissioner added that she was particularly disturbed that the text of the decree was developed and passed in a secretive manner, without consultations with civil society, victims, families of the victims or national human rights institutions.

“Past experiences elsewhere in the world have shown that without the active involvement and support of these key affected groups, mechanisms of this type may lead to further divisions and disagreements, so producing the opposite result to that intended,” she said.

The commission will also have the power to conduct reconciliation processes without the consent of the parties involved, and Ms. Pillay warned that the Government must not force people to reconcile.

“I am also concerned that the ordinance may be used to avoid or delay criminal investigations and prosecutions of conflict-related cases. Criminal justice should be reinforced, not replaced by other transitional justice processes such as truth and reconciliation commissions,” she added, noting that Nepal should address gaps in its law that adequately deal with violations such as torture and enforced disappearances.

Ms. Pillay stressed that her office (OHCHR) stands ready to provide support and advice to the Government to amend the decree so that it complies with international laws and principles, and called for open and broad-based consultation as the process continues. 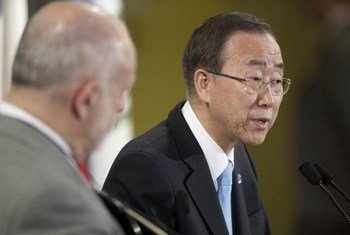 14 March 2013
United Nations Secretary-General Ban Ki-moon today welcomed the appointment of an interim electoral council in Nepal, which he said could end the political stalemate that has stalled implementation of the Comprehensive Peace Agreement that ended a civil war in 2007.