The United Nations tourism agency today welcomed the decision by the Government of Jamaica to relax visa regulations for tourists originating in a number of Eastern European countries, while also extending its current visa waiver system for some Latin American nationals.

The visa waiver for tourists from Russia, the Czech Republic, Hungary, Poland, Slovakia and Ukraine visiting Jamaica for up to 30 days was announced on 6 March 2013, together with the indefinite extension of the visa waiver in place for nationals of Colombia, Panama, and Venezuela, according to the UN World Tourism Organization (UNWTO).

“Jamaica’s decision is encouraging and sets an example for the way forward,” he added.

Although Mr. Rifai noted that “hurdles” regarding visa facilitation continue to remain in place in several countries, he pointed to recent UNWTO research indicating “considerable progress” over the past years.

In January, the UNWTO released a report underscoring the necessity of less stringent visa requirements as well as the facility of an electronic visa system, with Mr. Rifai warning that “an overall restrictive visa policy means lost opportunities for economic growth and jobs, which tourism could bring to destinations.”

“Travellers regard visas as a formality which entails a cost. This can be a deterrent to travel if costs – whether monetary or indirect – including distance, wait times and service, exceed a certain threshold,” he had noted, urging Member States to do more in sustaining tourism.

In particular, Mr. Rifai highlighted that financial assistance for the tourism sector would also help in promoting economic recovery for regions hard hit by the recession.

Jamaica’s waiving of visa requirements for visitors from Latin America in 2011 has proven to be a successful strategy, according to UNWTO, with Jamaican authorities witnessing a 50 per cent growth of tourist arrivals from the region the following year.

Following the easing of visa restrictions for emerging Eastern European markets, the UN agency reported that the Jamaican Government expects a similar impact to occur with tourists from those countries. 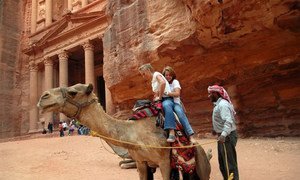 Despite lingering economic instability due to the global financial crisis, international tourism increased robustly over the last year with continuing growth expected throughout 2013, the United Nations today announced.