Eradicating polio, boosting vitamin A and de-worming four million children under the age of five are the goals of a three-day campaign launched today by the Chadian Government with the support of United Nations agencies and their partners.

“The combined immunization campaign constitutes an important step forward for Chad in its agenda to accelerate child survival and development,” said Bruno Maes, the Representative in Chad for the UN Children’s Fund (UNICEF), which is supporting the effort along with the World Health Organization (WHO).

“Vitamin A supplementation offers the child a better chance of survival and lower risks of being infected by serious infectious diseases. Meanwhile, children who are de-wormed have a better nutritional status, grow faster and develop better learning skills,” Mr. Maes added.

More than 9,600 additional community workers have been mobilized across the country to ensure that all targeted children are reached, including nomadic children, who are often difficult to reach, according to a UNICEF press release.

The agency noted that Chad has made tremendous progress towards the eradication of polio, with only 5 cases diagnosed in 2012 compared to132 cases in 2011.

“The campaign will help consolidate gains made in polio eradication in Chad, where no cases have been reported since June 2012,” Mr. Maes said.

He cautioned, however, that fundamental concerns remain in the country. There are still a significant number of unvaccinated or missed children during campaigns. “This is a concern in 8 of the 19 regions where the proportion of unvaccinated children has increased during supplementary immunization activities,” he said.

The Government is committed to overcoming those challenges, UNICEF says, noting that Chad has joined the UNICEF global initiative known as ‘Commitment to child survival: a promise renewed’, which aims to reduce the infant mortality rate in countries to below 20 per 1,000 births by 2035. 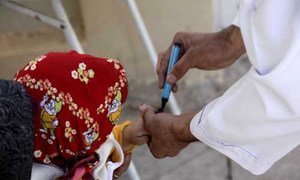 The United Nations health agency today called for renewed efforts to boost the campaign against polio, stressing that its eradication is technically feasible but political will is necessary to realize this goal.