The United Nations today expressed concern over Hungary’s adoption of an amendment to the constitution that threatens the independence of its judiciary, and stressed this could have a profound effect on the human rights of its citizens.

According to the Office of the UN High Commissioner for Human Rights (OHCHR), the amendment to the Fundamental Law (constitution) was adopted by the Hungarian Parliament on Monday without proper public discussion on issues that may affect the population’s human rights.

“The new amendment may further strengthen the already extensive powers over the judiciary held by the President of the National Judicial Office,” OHCHR spokesperson Rupert Colville told reporters in Geneva. “For example, the amendment upholds the President’s right to reassign cases to a different court – a provision that was previously adopted as a transitional measure and was subsequently struck down as unconstitutional by the Constitutional Court.”

This provision is also in violation of the European Union’s Convention on Human Rights, to which Hungary is a party.

“This Fourth Amendment to the Fundamental Law raises serious concerns in a variety of areas, including possible threats to the independence of the judiciary, the authority and the jurisprudence of the Constitutional Court and, by extension, to the rule of law in general,” Mr. Colville said.

He also welcomed recent reports stating that Hungary is recognizing the role of the Venice Commission to advice on its compliance with international and regional norms. Established in 1990, the Commission is the Council of Europe’s advisory body on constitutional matters.

Mr. Colville added that OHCHR will continue to closely monitor the situation.

♦ Receive daily updates directly in your inbox - Subscribe here to a topic.
♦ Download the UN News app for your iOS or Android devices.
judiciary 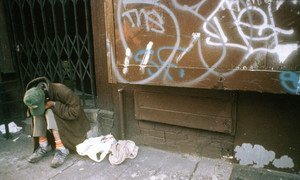 Recent legislation in Hungary outlawing homelessness risks having a discriminatory impact on those living in poverty, two United Nations independent experts warned today as they urged the authorities there to adopt a national housing strategy.