The United Nations humanitarian chief today urged the international community to do more to end the crisis in Syria which is now entering its third year.

The call came as Under-Secretary-General for Humanitarian Affairs Valerie Amos wrapped up a two-day visit to Turkey, where she spoke with Syrian refugees in the south-eastern Kilis Province.

“I met families who fled their homes more than 18 months ago. They are in despair. They feel abandoned by the international community. They all want the same thing: the conflict to end so that they can go home,”

As part of her visit, Ms. Amos also met in Ankara with the Turkish Deputy Prime Minister, Besir Atalay, and Foreign Minister Ahmet Davutoglu, as well as other Government officials and senior humanitarian officials, including the President of the Turkish Red Crescent Society (KIZILAY), Ahmet Lutfi Akar.

Syria has been wracked by violence since the uprising against President Bashar al-Assad began in March 2011. Up to 70,000 people have died, more than 1 million have fled to neighbouring countries, 2 million have been internally displaced and up to 4 million are in need of humanitarian assistance.

“This is a global crisis that requires a global response so that we can meet the growing and urgent needs of Syrians,” said WFP Executive Director Ertharin Cousin. “We are grateful for the generous contributions that we have received so far from around 30 government donors, including Australia, Canada, the European Union, Japan, United Kingdom, United States, but needs are escalating.”

The agency plans to reach 2.5 million people inside Syria and more than a million in neighbouring countries. However, this response is threatened by a lack of resources, and Ms. Cousin said WFP needs an urgent $156 million to continue its work to feed Syrians from now until June.

WFP started its emergency operation in Syria in August 2011 and has so far distributed more than 83,000 metric tons of food to millions of Syrians in over 400 different locations across the country, using 5,000 trucks and 55 ships.

“This is a critical time for Syrians. They have exhausted their savings and they need more help as this crisis goes into its third year, so now is not the time to reduce or stop our operations,” said Ms. Cousin. “We are determined to continue our life-saving assistance but we need ongoing support from generous donors – and the support of new donors – until a political solution is in place.”

WFP is funded entirely by voluntary contributions and delays in the arrival of funding mean that it will not be able to provide the increased food rations that it planned to deliver to Syrian families in March.

In the neighbouring countries, WFP teams in Iraq, Jordan, Lebanon, Turkey and Egypt are mainly using food vouchers to feed hundreds of thousands of Syrian refugees. So far, WFP has distributed over one million food vouchers and half a million food parcels in these countries.

The agency said that the current food basket includes rice, bulgur wheat, lentils, sugar, vegetable oil and salt. However, lack of funds will force WFP into further reducing the food basket as early as mid-April. 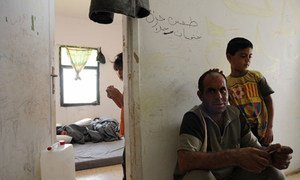 A generation of Syrian children may be “scarred for life” due to the unrelenting violence, displacement and damage to essential services caused by the Syrian conflict, the United Nations Children’s Fund (UNICEF) warned in a report released today.