14 March 2013
The trial chamber of the United Nations-backed court in Cambodia that is trying those accused of genocide and crimes against humanity today terminated the proceedings against former foreign minister Ieng Sary, who died this morning after being hospitalized since 4 March.

Mr. Sary, was arrested in November 2007, and was on trial at the Extraordinary Chambers in the Courts of Cambodia (ECCC), a mixed court set up under a 2003 agreement signed by the UN and the Government, on charges of genocide and crimes against humanity committed during the Khmer Rouge regime in the late 1970s.

He had been hospitalized several times since being detained by the Court, and an assessment of his fitness to stand trial by local and international medical experts was scheduled for later this month, according to a statement by the Court.

Mr. Sary, former so-called Brother Number Two Nuon Chea, was on trial along with his wife, Ieng Thirith, who formerly served as Social Affairs Minister for the Democratic Kampuchea – as Cambodia was known during the Khmer Rouge regime’s leadership of the country – as well as former head of State Khieu Samphan.

Last September, the Court found Ms. Thirith unfit to stand trial owing to medical reasons and granted her a provisional release. Expert psychiatrists who examined diagnosed her with clinical dementia, most likely Alzheimer’s, which would hinder her participation in court hearings.

Nearly two million people are thought to have died during the Khmer Rouge regime between 1975 and 1979.

In the wake of the passing of Mr. Sary, the UN Special Rapporteur on the situation of human rights in Cambodia, Surya P. Subedi, today urged the ECCC, the Cambodian Government, international donors and the UN to expedite the Khmer Rouge trials.

“I call upon all actors, including the international community at large, to renew the commitment to support the ECCC to complete its work with full independence,” he stressed. “We owe it to the surviving victims of the Khmer Rouge, the families of the victims, and the whole of Cambodian society that continues to suffer from the impact of the Khmer Rouge to this day.” 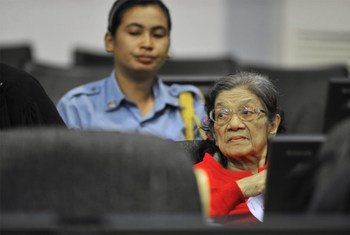 16 September 2012
A former Khmer Rouge leader found unfit to stand trial owing to medical reasons has been granted a provisional release by the United Nations-backed court in Cambodia that is trying those accused of genocide and crimes against humanity.