14 March 2013
Governments need to revise their driving laws and vehicle safety standards if the number of deaths from road traffic crashes is to be substantially reduced, the United Nations World Health Organization (WHO) today reported, showing that more legislative muscle and better enforcement is needed to keep pedestrians, drivers and cyclists safe on the roads.

Governments need to revise their driving laws and vehicle safety standards if the number of deaths from road traffic crashes is to be substantially reduced, the United Nations World Health Organization (WHO) today reported, showing that more legislative muscle and better enforcement is needed to keep pedestrians, drivers and cyclists safe on the roads.

Only 28 countries – covering seven per cent of the world's population – have comprehensive road safety laws on key risk factors: drinking and driving, speeding, and failing to use motorcycle helmets, seat-belts and child restraints, according to the “Global status report on road safety 2013: supporting a decade of action.”

“Political will is needed at the highest level of government to ensure appropriate road safety legislation and stringent enforcement of laws by which we all need to abide,” WHO Director-General Margaret Chan said in a press release.

The report, which compiles information from 182 countries, is the second in a series analyzing to what extent countries are implementing a number of effective road safety measures.

In terms of laws, 90 countries have motorcycle helmet laws that cover all riders. Some 111 countries have comprehensive seat-belt laws, while 96 countries have a law requiring child restraints, such as a child-safety seat.

The problem, according to the report, is the inadequate enforcement of those laws.

According to the figures cited, while half the countries reviewed were able to cut the number of fatalities, the other half increased, resulting in 1.24 million deaths on the road in 2010.

Of those killed in road traffic crashes, the majority were teenage boys and men younger than 44 years of age.

The report's authors show that while the majority of accidents are car-related, crashes involving pedestrians and cyclists constitute 27 per cent of all road deaths. That figure rises to 75 per cent in some countries and demonstrates “decades of neglect of the needs of these road users in current transport policies, in favour of motorized transport.”

Geographically, the risk of dying from a traffic injury is highest in the African region and lowest in Europe.

Around 90 per cent of road traffic deaths and injuries occur in low- and middle-income countries, WHO reported last World Day of Remembrance for Road Traffic Victims, marked annually on the third Sunday in November.

In his message for the Day, Secretary-General Ban Ki-moon had commended governments for taking positive steps to address traffic accidents. One hundred countries had pledged in 2011 to save five million lives by implementing road safety strategies and information campaigns at the launch of the Decade of Action for Road Safety, which ends in 2020. 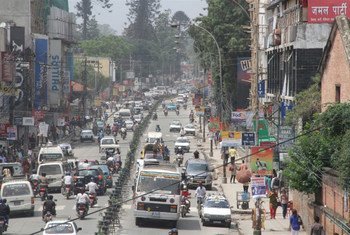 18 November 2012
Secretary-General Ban Ki-moon today highlighted the importance of road safety in preventing more than one million people from dying and many more from getting injured each year in traffic accidents.