Secretary-General Ban Ki-moon and the head of the United Nations-backed Alliance of Civilizations, Nassir Abdulaziz Al-Nasser, have offered their congratulations to Cardinal Jorge Mario Bergoglio, who has taken the name Pope Francis on his assumption of the papacy.

“I look forward to continuing cooperation between the United Nations and the Holy See, under the wise leadership of His Holiness Pope Francis,” Secretary-General Ban Ki-moon said in a statement issued immediately after the announcement was made at the Vatican.

“We share many common goals – from the promotion of peace, social justice and human rights, to the eradication of poverty and hunger – all core elements of sustainable development,” he added.

“We also share the conviction that we can only resolve the interconnected challenges of today’s world through dialogue. I am certain that His Holiness will continue to build on the legacy of his predecessor, Pope Benedict XVI, in the promotion of inter-faith dialogue which is at the heart of the Alliance of Civilizations initiative.”

Mr. Al-Nasser, the High Representative for the Alliance of Civilizations, which aims to improve understanding and cooperation between cultures and religions, said he looks forward to future cooperation in promoting the vision of inter-religious dialogue, the principles of peace, tolerance and co-existence, which constitute the core of the mission of the Alliance.

“Through mutual cooperation between the UN Alliance of Civilizations and the Vatican, they can both advance the cause of peace and build bridges of understanding and dialogue instead of divisiveness and hatred,” said a statement issued by his spokesperson.

The 76-year-old new Pope hails from Argentina. The High Representative noted that his selection is “a reflection of the strength of Latin America, a region with a rich heritage and a well-recognized legacy around the globe.”

♦ Receive daily updates directly in your inbox - Subscribe here to a topic.
♦ Download the UN News app for your iOS or Android devices.
interfaith

Annan urges respect, and not narrow 'tolerance,' for different faiths and cultures 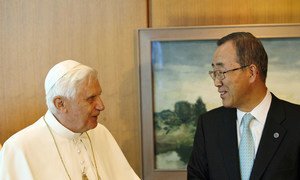 Secretary-General Ban Ki-moon today lauded the commitment of Pope Benedict XVI to inter-faith dialogue and the promotion of peace, in reaction to the Pontiff’s decision to step down at the end of this month.