Haiti needs to develop a coordinated plan of action on human rights and a framework on the rule of law, an independent United Nations expert has said, noting that while positive changes are coming very slowly, there is a strong expectation from Haitians to see improvements.

“There is a need to have a strategy, there is a need also for each of the ministers to understand that they have a piece of the puzzle of the rule of law,” Michel Forst, Independent Expert on the situation of human rights in Haiti, told UN Radio yesterday.

The interview was Mr. Forst’s first with the UN in New York since he returned from Haiti on 8 March, his 12th visit to the country. He will present his findings to the UN Human Rights Council in Geneva on 20 March.

“The international community has done a lot to improve the situation,” Mr. Forst said, noting the rubble that has been removed from the streets and official buildings and homes that have been rebuilt.

“But still a lot of people live in camps in very difficult situations with no access to water or sanitation. Access to food is very difficult. It is very difficult for families as well to bring children to school,” Mr. Forst recounted of his visit, which started on 2 March.

The 2010 earthquake as well as Hurricanes Isaac and Sandy have put the country in a very difficult situation, Mr. Forst said, adding that there is a need for the key stakeholders – including the international community – to push forward.

“It is a big challenge not only for the national authorities but also the international community to move ahead, to bring the stability that the country needs to make sure that people have decent access to the basic rights,” Mr. Forst said.

Among those rights is the right to education. Mr. Forst urged an inspection of how schools are run, saying that children leave after years of schooling without knowing how to read or write because teachers are not properly trained.

“A lot of effort has been put into the country but it will take years to make sure all children have access to education,” he said, adding that education must be tackled on a “human-rights based approach.” 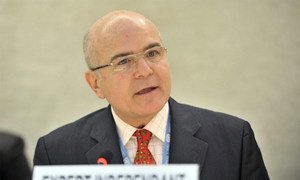 An independent United Nations human rights expert today wrapped up a visit to Haiti by calling for the strengthening of State institutions so they can play their key role in the running of the country and in the functioning of democracy.