Citizens from all over the world can help shape the future global development agenda through their participation in the United Nations survey ‘My World’, which allows them to vote on issues they believe are priorities and should be addressed by world leaders.

Launched this week, the survey seeks to build on the momentum generated by the anti-poverty targets known as the Millennium Development Goals (MDGs) and tackle challenges that go beyond their 2015 deadline.

In a video message for the survey, Secretary-General Ban Ki-moon encouraged the public to participate. “Vote and tell us what issues matter most to you and your family. Make a difference. Mark a difference,” he said.

Votes can be submitted online, and in some countries by mobile phone or through offline ballots. Results from the survey will be shared with Mr. Ban, his High-level Panel on the Post-2015 Development Agenda, and world leaders.

Thousands of people from 189 countries have already voted during an initial roll-out period, and preliminary results show education is the issue that people think is most important for improving their lives. An honest and responsive government, health, water, sanitation and job and food security have also been considered major priorities.

Yesterday, Mr. Ban met with four youth volunteers who are capturing communities’ development priorities and called on the public to make a difference on the issues that impact their lives the most.

These inputs, along with those from across the UN system and beyond, including the outcomes of consultations going on worldwide and the voices of businesses, academia and the scientific community, will feed into the work of the Panel, which will present its report in May.

“Our goal must be a single, coherent global agenda that can be every bit as successful in inspiring and mobilizing people as the MDGs have been,” Mr. Ban noted in remarks today to a meeting of the bloc of developing nations known as the Group of 77 and China.

“And even now, we must redouble our efforts toward the MDGs between now and 2015,” he stated, noting that an important milestone in that effort is around the corner.

“Friday, April 5th, will mark 1,000 days to the end of 2015 – the deadline for achieving the goals. This moment provides an opportunity to raise awareness and galvanize action. The UN system will mobilize on that day and throughout the period ahead to accelerate our efforts.”

Speaking at a press briefing in New York, Director of the UN Millennium Campaign Corinne Woods said partnerships with governments, civil societies, corporations, and within the UN system would play an important role to increase survey participation and ensure it includes the responses not only of people with internet access, but also those without it.

“Partnerships are going to be absolutely key,” she said. “This is the only way we will be able to get a clear picture of what are the important issues and what matters.”

My World is one of several tracks available for people to participate in framing the next development agenda. The UN and partners are also engaged in almost 100 national and thematic consultations worldwide, and citizens can continue to contribute their ideas and perspectives to the global consultations through the World We Want 2015 online platform.

MY World was developed by the UN Development Programme (UNDP), the UN Millennium Campaign, the Overseas Development Institute (ODI) and the World Wide Web Foundation in conjunction with IPSOS MORI. 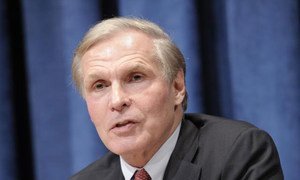 United Nations envoy Ray Chambers today highlighted the critical impact that new funding announced by the Global Fund to Fight AIDS, Tuberculosis and Malaria will have in achieving the health-related Millennium Development Goals (MDGs) by the 2015 deadline.