12 March 2013
The recent military intervention in northern Mali has been followed by a serious escalation of retaliatory violence by Government soldiers who appeared to be targeting members of various ethnic groups perceived to be supportive of the armed groups, a senior United Nations official warned today.

Deputy High Commissioner for Human Rights Kyung-wha Kang told the UN Human Rights Council in Geneva that members of the Peuhl, Tuareg and Arab ethnic groups were being targeted.

“The situation has been exacerbated by the propagation of inflammatory messages, including through the media, stigmatizing members of these communities, thousands of whom have reportedly fled out of fear of reprisal by the Malian army,” she stated.

“Those who remain in the country are afraid of being targeted not for what they have done, but for who they are,” Ms. Kang added, as she presented the High Commissioner’s report on the situation of human rights in Mali.

The report is based on the findings of two missions deployed by the Office of the High Commissioner for Human Rights (OHCHR) to the region late last year, and covers the period from 17 January to 20 November 2012.

It highlights the human rights violations committed primarily by the various armed groups that controlled the three main regions of northern Mali – Kidal, Gao and Timbuktu – but also raises some issues of concern in the south.

According to the report, reprisal attacks and inter-ethnic conflicts appear to have materialized since January, when the French intervention took place. While the violations by the extremist groups have largely been stopped, there have been widely reported allegations of serious human rights violations taking place in the recovered territories.

Ms. Kang acknowledged the public commitments made by the Government of Mali to fulfil its obligations under international human rights law and to fight impunity, as well as statements by senior government and military officials condemning human rights violations and retaliatory violence.

“These commitments are, however, not yet sufficiently translated into concrete actions to ensure that prompt and independent investigations are carried out in order to identify and prosecute perpetrators and provide effective remedies to victims,” she stated.

“We call on the Malian authorities to protect the communities at risk and to ensure that their troops act in accordance with human rights law and international humanitarian law. The civilian population should be protected and the suspected rebels who have been arrested should be treated humanely and their due process rights respected,” Ms. Kang added.

“Allegations of involvement of the elements of the Malian army in acts of reprisals against civilians should be investigated and those responsible should be brought to justice.” 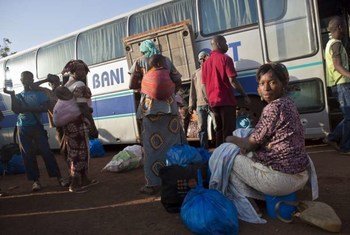 1 March 2013
The United Nations refugee agency today stressed that efforts to achieve reconciliation and combat impunity are needed to avoid long-term displacement in Mali, where hundreds of thousands of people have been uprooted since fighting broke out over a year ago.