11 March 2013
Secretary-General Ban Ki-moon today commended Burundian political actors’ commitment to dialogue as all political parties met in the country’s capital, Bujumbura, for the first time since 2010 to discuss issues related to the electoral process.

“This meeting marks another step forward for Burundi. For the first time since 2010, you have come together to discuss elections. And more broadly to shape your country’s political future,” Mr. Ban stated in a video message to participants at an electoral lessons learned workshop organized by the United Nations Office in Burundi (BNUB).

“I hope your discussions will help define Burundi’s next steps on the path of democracy and development. I applaud your commitment to dialogue. I encourage you to have open, constructive discussions on sensitive issues,” he said.

Representatives of more than 40 political parties and political actors, including some who left the country after the 2010 elections, as well as civil society leaders, are attending the three-day workshop aimed at analyzing the lessons from the 2010 electoral process and determining elements for a road map towards the 2015 presidential and parliamentary elections.

The Secretary-General stressed the importance of the elections for Burundi, “which is determined to address its peacebuilding and development challenges, but also inclusive dialogue” during the pre-electoral period.

“Elections are not the only ingredient in a democratic system. Inclusive dialogue is critical even before elections. Democracy also demands diversity, openness and participation. These contribute to an environment conducive to free, fair and transparent elections,” he added.

“After elections, the winners must display magnanimity. The losers must accept the outcome with dignity. Both must work together to benefit all citizens,” Mr. Ban noted, as he reiterated the UN’s willingness to continue supporting Burundi.

The workshop was inaugurated by the First Vice President of Burundi, Therence Sinunguruza, who expressed the Government’s openness and willingness to work with all parties involved towards “the preparation of a legal and institutional framework towards peaceful, free, transparent and democratic elections” in 2015.

On his part, the Special Representative of the Secretary-General in Burundi, Parfait Onanga-Anyanga, remarked that the massive presence of participants was a clear sign of political actors’ will to move forward and in line with President Pierre Nkurunziza’s appeal in August 2012 for a well organized electoral process in 2015.

Mr. Onanga-Anyanga stressed that the workshop provides an opportunity to place dialogue at the heart of the democratic process. He also raised the need to reinforce the political dialogue process initiated in 2012 and to sustain it through 2015 and beyond, as well as the need to create a pre-electoral environment that will enable all political parties to conduct their activities unhindered.

Last month the UN Security Council extended the mandate of BNUB until 15 February 2014 so that it can continue to support peace and long-term development in Burundi, including assisting the Government in fostering inclusive elections in 2015. 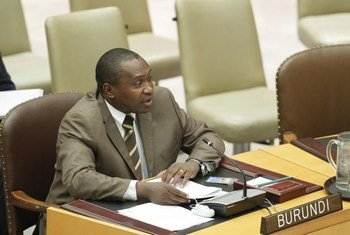 13 February 2013
The Security Council today extended the mandate of the United Nations political mission in Burundi for another year to support peace and long-term development in the country, as well as to redouble efforts to tackle corruption and allow people the freedom to organize ahead of the presidential and parliamentary elections in 2015.