11 March 2013
The top United Nations humanitarian official in Haiti has expressed grave concern about recent incidents of forced evictions of internally displaced persons (IDPs), following his visit to a site in the capital, Port-au-Prince, from which thousands of people were forced to leave.

While recognizing the right of owners to enjoy their property, the acting UN Humanitarian Coordinator in Haiti, Ross Mountain, recalled that the practice of forced eviction often results in violations of human rights such as the right to life and security of the individual.

Following a visit to the Acra 2 camp on 2 March, Mr. Mountain stressed that “these families have suffered intimidation, physical violence and the destruction of their shelters, including through arson.”

His visit comes after the eviction of about 1,000 families in Acra 1 and Acra 2 on 17 February.

Nearly 350,000 IDPs are estimated to be living in 450 camps, according to a news release issued by the office of the Humanitarian Coordinator. More than 66,000 in 150 camps have been forcefully evicted since July 2010, according to figures cited by the humanitarian community. Another 73,000 are or will face eviction threats this year.

“Haitian authorities have the responsibility to promote and protect the rights of all their citizens, including IDPs,” Mr. Mountain stated.

Following the visit, he met with the Minister of Human Rights and the Fight against Extreme Poverty, Rose Anne Auguste.

The Minister said a judicial inquiry into the forced evictions is ongoing, and security around the most at-risk camps has been strengthened.

Mr. Mountain is also the acting Deputy Special Representative at the UN peacekeeping mission in Haiti, known by its French acronym MINUSTAH. The Mission supports the country’s recovery efforts, including the promotion of stability and security, and strengthening the rule of law, respect for human rights and good governance. 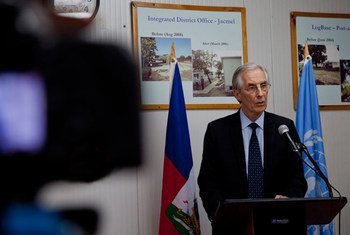 15 February 2013
The United Nations envoy in Haiti today voiced concern at the ongoing impasse in Haiti over the long-delayed elections and outlined several priorities to move the process forward.