Amid rising deaths among the Palestinian refugee population in Syria and funding shortfalls for humanitarian assistance in the war-torn country, a senior United Nations official today urged international donors to step up their financial support for relief efforts in what he described as “a messy, violent and tragic war for the civilian population.”

In an interview with the UN News Centre, the Commissioner-General of the UN Relief and Works Agency for Palestine Refugees in the Near East (UNWRA), Filippo Grandi, warned that providing access and resources to the 500,000 Palestinian refugees trapped in Syria were among the “most urgent” priorities but could only be achieved with appropriate financing from the international community.

“This is very urgent and important for all of us on the ground,” Mr. Grandi said, adding that it was also incumbent on the international community and the Security Council “to find agreement on how to put an end to this violence.”

“Otherwise,” he added, “the suffering will skyrocket and with it the enormous needs of these populations in distress.”

As the fighting in Syria continues to escalate, the Palestinian refugee population there has come under increasing threat. Twelve Palestinian refugees were killed by heavy weaponry on 7 February in the Damascus suburb of Yarmouk; five of them were members of the same family.

Following that incident, UNRWA cautioned that the Palestinian refugees were unable to move around safely and faced severe restrictions on movement owing to escalating threats from shelling and armed clashes, exacerbating vulnerabilities that existed prior to the Syrian conflict.

“The Palestinian refugees have been affected just like everybody else,” admitted Mr. Grandi, “but I would not hesitate to say that today all of them are in need.”

One constant that UNRWA has encountered since the uprising against Syrian President Bashar al-Assad began over 20 months ago has been the slow trickle of funding needed to prop up the on-the-ground relief efforts, particularly as the Agency’s tasks have shifted from developmental assistance to more immediate emergency aid.

According to statistics released by UNRWA earlier this year, most of the Palestinian refugees in Syria now rely on the Agency as their sole means of support. Several UNRWA schools in the country are currently acting as a last place of refuge for 9,000 people, while tens of thousands languish under harsh conditions in neighbouring countries. Moreover, some 20,000 people have fled to the over-crowded refugee camps of Lebanon.

Mr. Grandi noted that out of the $1.5 billion UN-wide humanitarian appeal put out in January, $90 million were, in fact, destined for UNRWA’s relief efforts over the next six months. Nevertheless, he cautioned that more funding would be needed in order to maintain crucial humanitarian assistance work.

“I estimate that between contributions made and pledges and other broader pledges, we are about halfway through,” he stated. “Compared to others we are not doing so badly, but we still need the other half to continue our emergency activities.”

With jobs steadily disappearing across Syria and food becoming increasingly scarce, UNRWA’s role in assisting the Palestinians trapped in Syria has slowly evolved from providing regular services – ranging from education to health needs – to bringing emergency services to a population trapped by a destructive and overwhelming conflict.

As a result, the UNRWA chief pointed out that regular services were now being substituted with emergency ones such as distributing cash, food supplies, and medical aid to the beleaguered refugee population.

“Unfortunately and increasingly, our aid is turning from the more developmental aid that we do normally to humanitarian assistance. And the challenges are those that affect everybody – insecurity and insufficient resources, but insecurity in particular.”

At a press conference at UN Headquarters in New York later in the day, Mr. Grandi followed up his earlier appeals lamenting that the increasing violence had hampered humanitarian access to the refugees. He further noted that, unlike Syrian nationals, Palestinians had so-called “limited flight options” as neighbouring countries, such as Jordan, had capped their admittance numbers to the Palestinian refugee population.

“The challenges are to continue to provide the services that we provide to the half a million plus people – keep schools open, keep health centres running, keep assistance to the poor going,” he continued.

“That’s an increasing challenge in a situation of growing insecurity, lack of access, and other problems that affect everybody’s humanitarian action in Syria.”

♦ Receive daily updates directly in your inbox - Subscribe here to a topic.
♦ Download the UN News app for your iOS or Android devices.
palestin|syria 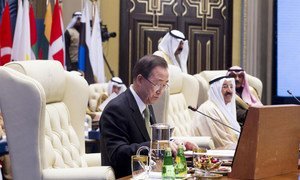