“Look around at the women you are with. Think of those you cherish in your families and your communities, and understand that there is a statistical likelihood that many of them have suffered violence in their lifetime,” Secretary-General Ban Ki-moon said in his message to mark International Women's Day, observed annually on 8 March.

The focus of the Day this year is on ending violence against women and girls. According to UN figures, up to 7 in 10 women globally will be beaten, raped, abused, or mutilated in their lifetimes, and while some 125 countries have laws that penalize domestic violence, there are still 603 million women that live in countries where it is not a crime.

Mr. Ban recalled that 2012 was a year of “shocking” crimes of violence against women and girls. “One young woman was gang-raped to death. Another committed suicide out of a sense of shame that should have been attached to the perpetrators. Young teens were shot at close range for daring to seek an education.

“These atrocities, which rightly sparked global outrage, were part of a much larger problem that pervades virtually every society and every realm of life.”

The Executive Director of the UN Entity for Gender Equality and the Empowerment of Women (UN Women), Michelle Bachelet, welcomed the progress countries have made in the past years to eliminate violence against women, but stressed much more needs to done.

“I have hope because awareness and action are rising for women's rights. A belief is growing that enough is enough,” Ms. Bachelet said in her message. “But I am outraged because women and girls continue to suffer high levels of discrimination, violence, and exclusion. They are routinely blamed and made to feel shame for the violence committed against them, and they too often search in vain for justice.”

She called on governments to keep their promises and protect human rights in line with international agreements and promote a change in attitudes that encourages equal participation and decision-making in their societies.

“Women's issues are global issues that deserve urgent priority. There can be no peace, no progress as long as women live under the fear of violence,” she added.

In her message for the Day, UN High Commissioner for Human Rights Navi Pillay noted that while violence against women is one of the most pervasive violations of human rights, it is often met with indifference by authorities in many countries, leading to a lack of protection of victims and prosecution of perpetrators.

Public outcry is a first step that can lead to change in this regard, Ms. Pillay said, pointing to cases in India, South Africa and Papua New Guinea where public outrage has prompted authorities to act.

However, she warned that temporary outrage and passing legislation is not enough, and underlined that eliminating gender violence must be a sustained effort.

“We must not allow this attention to fade,” she said. “Each country will need to find its own response to ensure accountability for sexual and gender-based crimes, but continuing to turn our backs on what is happening to millions of women across the world is not the answer.”

“This fight is not just an important end in itself,” she said. “Gender-based violence is a means by which inequalities between men and women are perpetuated throughout the world. As such, it is essential to address if we are to achieve the Millennium Development Goals and accelerate development progress more broadly.”

In addition to immediate health consequences, violence has a long-term impact on women and girls, ranging from education to employment and economic status, to participation in politics, Miss Clark said.

It is also costly for countries as responses to survivors and lost productivity can be as high as $32.9 billion in countries such Canada, the United Kingdom and the United States. In developing countries, domestic violence also causes a loss in earnings. In Uganda for example, its cost was estimated at $2.5 million in 2007.

The heads of the Food and Agriculture Organization (FAO), the International Fund for Agricultural Development (IFAD) and the World Food Programme (WFP) also highlighted the link between gender-based violence and development, in particular how it affects countries' food security, as women make up more than 40 per cent of the agricultural labour force in developing countries.

In a joint statement, FAO Director-General José Graziano da Silva, IFAD President Kanayo F. Nwanze and WFP Executive Director Ertharin Cousin underscored that “in spite of the major role played by women in producing food and feeding their families, little attention has been paid to the connection between gender, violence and food security.”

They pointed to the link between discrimination against women and malnutrition, since boys are prioritized over girls when receiving food in their households, and daughters are many times married off during times of famine so there is one less mouth to feed.

Women are also vulnerable to being forced to trade sex for food, and are at risk of rape whilst spending hours collecting firewood. In addition, they often lack land ownership rights.

“Improving equality in women's access to agricultural inputs such as seeds, tools, fertilisers, education and public services would contribute significantly to achieving food security and better nutrition for all,” they said.

Ensuring women are safe in their workplace must also be a priority, said the Director General of the UN Industrial Development Organization (UNIDO), Kandeh K. Yumkella. With millions of women being employed in the manufacturing sector, violence and sexual harassment prevents them from engaging in productive work.

Mr. Yumkella said empowerment is important to provide women with access to entrepreneurial and business skills, technologies and credit, so that they can bring about economic change for themselves. “The economic empowerment of women indirectly reduces violence against women by increasing women's choices and bargaining power at work and in the home,” he said.

The Executive Director of the UN Office on Drugs and Crime (UNODC), Yury Fedotov, called on countries to develop innovative crime prevention policies that target domestic and family-related violence.

According to UNODC statistics, some 84,000 females were the victims of homicide globally in 2010. In Europe alone, 18 women are killed every day on average and 12 of them are murdered at the hands of their intimate partners or other family members.

Violence or the fear of violence can also prevent women from negotiating safer sex, said the Executive Director of the Joint UN Programme on HIV/AIDS (UNAIDS), Michel Sidibé, which makes them more vulnerable to contracting HIV.

“Today, half of all people living with HIV are women. Every minute one young woman is infected with HIV,” he said. “This is not acceptable. Only when we value a girl's health and welfare as highly as a boy's, only when we listen and act equally to women's voices – then can we have a chance at ending this epidemic.” 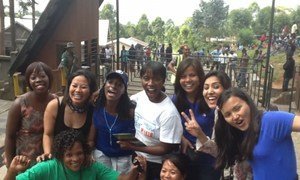