UN Photo/Sylvain Liechti
Residents returning to destruction in the town of Kitchanga in the Democratic Republic of the Congo (DRC).
7 March 2013

The United Nations today warned that tens of thousands of people in the Democratic Republic of the Congo (DRC) are in danger as clashes continue between national troops and an armed group in the town of Kitchanga, displacing thousands and affecting humanitarian facilities and access to basic services.

The United Nations today warned that tens of thousands of people in the Democratic Republic of the Congo (DRC) are in danger as clashes continue between national troops and an armed group in the town of Kitchanga, displacing thousands and affecting humanitarian facilities and access to basic services.

According to the UN Office for the Coordination of Humanitarian Affairs (OCHA), the clashes between the DRC armed forces (FARDC) and the Alliance des Patriotes pour un Congo Libre et Souverain (APCLS) have killed tens of civilians, including a humanitarian worker, wounded hundreds of people and displaced thousands since fighting began in late February. Some 5,000 of those displaced have sought refuge around the UN peacekeeping base in Kitchanga.

Humanitarian assistance has also been affected as warehouses have been burned down, medical facilities have been destroyed and the city’s water supply system has been cut off.

“I’m very concerned that thousands of lives are again endangered,” said the UN Humanitarian Coordinator in the country, Moustapha Soumaré. “I’m particularly worried about the increase and deepening of ethnic violence and reports of arbitrary arrests. The parties to the conflict have to avoid civilian casualties at all cost, respect the civilian character of internally displaced settlements and ensure that humanitarian actors can provide much needed assistance.”

Kitchanga is located in North Kivu province, which hosts more than 799,000 internally displaced persons (IDPs), representing one third of the displaced population in DRC.

Since the attacks that culminated in the temporary occupation of the city of Goma in November, humanitarian agencies have tried to mobilize the necessary resources to assist hundreds of thousands of people who are still displaced and are in the process of returning home.

In a news release, OCHA said the current deterioration of the security and displacement situation risks exposing even more people to increasingly precarious living conditions.

“Humanitarian agencies are braving a very volatile security situation to deliver aid and assess needs,” the office said. “However, the continuing fighting is hindering nearly all humanitarian missions from more effectively responding to urgent needs, notably the protection of civilians.”

OCHA called for complete access to vulnerable populations and for all parties to the conflict, in particular the Congolese authorities, to actively engage in the protection of civilians and humanitarian workers. 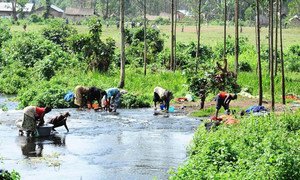 The United Nations peacekeeping operation in the Democratic Republic of the Congo (DRC) is sheltering some 400 people in what remains a tense situation following fighting between national troops and an armed group, a spokesperson for the world body said today.