OCHA/Imane Cherif
Refugees on the move in North Kivu in the Democratic Republic of the Congo.

5 March 2013
Secretary-General Ban Ki-moon today called on the Security Council to authorize the deployment of a special force within the current United Nations peacekeeping operation in the Democratic Republic of the Congo (DRC) to address imminent threats to peace and security.

Referred to as the Intervention Brigade, the proposed force will have the ability to conduct, with or without the Congolese national army, offensive operations against all armed groups that threaten peace in the eastern part of DRC – a region that is prone to cycles of violence and consequent humanitarian suffering.

It will be established within the UN Organization Stabilization Mission in DRC (MONUSCO) for an initial period of one year, as proposed by the Secretary-General in a special report submitted to the Council on the DRC and the Great Lakes region.

“This enforcement capacity, which was initially called for by the regional actors, seeks to address the imminent threats to stability and will provide the most appropriate response to the active conflict environment in which MONUSCO has been operating for several years,” Mr. Ban told the Council.

“The Intervention Brigade will be tasked with containing the expansion of both Congolese and foreign armed groups, neutralising these groups, and disarming them. This will provide much needed capacity to our peacekeeping operation.”

The establishment of the brigade is designed to further support the political objectives of the Peace, Security and Cooperation Framework for the DRC and the region – the peace deal signed last month in Addis Ababa, Ethiopia.

The UN will serve as a guarantor of the agreement, together with the African Union, the Southern African Development Community (SADC) and the International Conference on the Great Lakes region (ICGLR).

“All of us understand that signing the Framework is a beginning, not an end,” said Mr. Ban, who will soon appoint a special envoy, who, together with the concerned stakeholders, will support the implementation of the agreement.

Speaking to reporters after the meeting, the Secretary-General said the UN has done its utmost to broker an agreement that can finally break the horrendous cycles of violence. “The onus is now on the signatories to show strong, consistent and sustained leadership.”

Nearly a million people were displaced in the province of North Kivu during the clashes between the fighters from the rebel M23 group and the Congolese national army (FARDC) late last year, bringing the total number of internally displaced persons (IDPs) in eastern DRC to 2.6 million.

While the fighting has stopped, insecurity prevails, and is growing in other areas of the DRC, Mr. Ban noted.

“Perhaps some would dismiss the recent unrest in the eastern DRC as yet another cycle of violence in a long-plagued region of the world; but we have it within our hands to break that cycle and shape something different,” he stated.

Also today, the UN High Commissioner for Refugees (UNHCR) called for a further $70 million for its operations in 2013 to help thousands of displaced civilians in the Great Lakes region. The money is for people uprooted by conflict in North and South Kivu last year, as well as anticipated displacements this year. 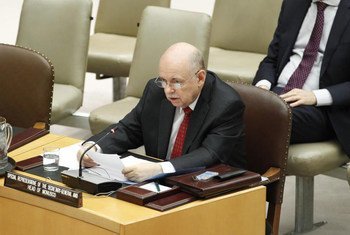 22 February 2013
Ahead of a new peace deal for the Democratic Republic of the Congo (DRC) to be signed this weekend, the top United Nations official there warned today that the security situation is unstable, and urged the Security Council to provide the necessary support and authorization for an additional military brigade force within the current UN peacekeeping force.