WFP/Claudia Altorio
The all-female climbing team of women from Africa and Nepal.
5 March 2013

The team, made up of seven Nepalese women and three African women, participated in the expedition as a way to raise awareness of the importance of women’s rights, in particular education for girls.

“We are on the top! Nothing is impossible if we struggle to pursue our dreams,” said Nimdoma Sherpa, who is also a former recipient of school meals provided by the World Food Programme (WFP) in Nepal.

“Nimdoma is an example of what girls’ education can do,” said Shailee Basnet, the leader of the Nepali group. “We know there are many more Nimdomas around the world and we hope we can motivate them to achieve their dreams.”

“This has been such an exciting experience,” said Anna Indaya, a member of Tanzania’s endangered Hadzabe people, who is a teacher in a WFP-supported primary school in Arusha, Tanzania.

“I had to fight to receive an education when I was growing up and I certainly had to fight to get up this mountain. Now, as a teacher, I see every day the struggle that young Tanzanian girls go through to attend school. I never thought I’d have this amazing opportunity to show girls and young women everywhere what you can achieve through sheer determination.”

The team, which began their ascent on 28 February, documented their journey on the online platform Twitter, using the hastag #WFPkili2013. In coming days, they will visit schools around Dar es Salaam, Arusha and Moshi to share their inspiring stories and talk about the importance of education.

“This is one of the hardest things I’ve ever done,” said Hlubi Mboya, a South African actress and WFP National Ambassador Against Hunger, adding that her message to girls across the African continent is to “never give up, be your own hero, never quit, never fear failure.”

The climb was supported by the Tanzanian Government, WFP and Child Reach International, a non-governmental organization working with communities to improve children’s access to education and healthcare. 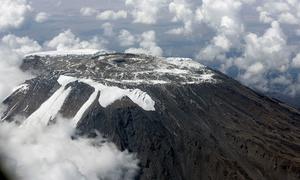 With the support of the United Nations and partners, an all-female team will climb Mount Kilimanjaro in Tanzania to highlight the importance of women’s rights and in particular, education for girls.