Human rights must be at the heart of future development agenda, UN panel told

MDG 8: a global partnership for development

Human rights must be at the heart of future development agenda, UN panel told

1 March 2013
Human rights are vital for achieving the anti-poverty targets known as the Millennium Development Goals (MDGs), which world leaders have pledged to attain by 2015, and must figure prominently in any development agenda beyond that date, a high-level United Nations panel held in Geneva heard today.

“Human rights are part of the DNA of the United Nations and the birthright of every human being. Every member of the human family has a right to grow and develop their full potential in a secure and sustainable environment,” Secretary-General Ban Ki-moon said in his remarks to the panel, held at the Human Rights Council in Geneva.

This September, the President of the General Assembly will convene a special event on the MDGs to assess progress, as well as identify remaining gaps and challenges ahead.

“I call on all Member States to embrace this opportunity and I urge all stakeholders to ensure that international human rights standards and principles help guide our post-2015 goals and objectives,” said Mr. Ban.

The largest body of independent experts in the UN human rights system urged the international community to focus on social protections in the post-2015 agenda and proposed a specific goal on equality.

“The MDGs have remained silent regarding inequalities,” the group warned in a news release, pointing to human rights, equality and non-discrimination, and sustainability to be the focus of the post-2015 development agenda.

“As we approach the 2015 deadline for the realization of the MDGs, the international community must cement the gains achieved, build on the lessons learned and aim higher and be more ambitious,” Michel Forst said on behalf of the group of 72 independent experts charged by the Council with addressing specific country situations and thematic issues.

Addressing the high-level panel, Mr. Forst noted that 870 million people today are hungry “not because of insufficient food production, but because they suffer from insufficient social protection.”

He stressed that equality supports economic development and ensures sustainable growth, contrary to what he said was the prevailing view that it reduces efficiency and hinders growth.

“We will need to address inequality once and for all as it constitutes one of the most persistent challenges that prevent millions of people from living a life in dignity. We must aim for justice for all; those without a voice do not need charity,” Mr. Forst said.

He added that the post-2015 development agenda should include “a stand-alone goal on equality in order to foster more inclusive forms of development.” 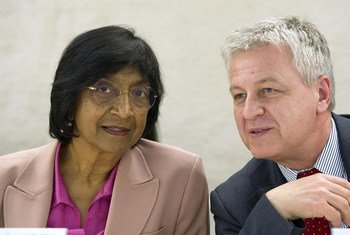 28 February 2013
The top United Nations human rights official today highlighted the work being carried out by her office to tackle numerous crises worldwide, and stressed the need to put people first and ensure that human rights remains a priority on the global agenda.