South Sudan’s cereal production up but not enough for all farmers, UN reports

South Sudan’s cereal production up but not enough for all farmers, UN reports

1 March 2013
Despite improved harvests, nearly 40 per cent of South Sudan’s population – or one million people – will have trouble getting enough to eat this year, according to a new United Nations report released today, which also warns that continued fighting could increase the number of people needing aid.

Good rains, improved cultivation practices and expanded area under cultivation increased food production in the world’s newest country by over 35 per cent between 2011 and 2012, the UN Food and Agriculture Organization (FAO) and WFP reported, as they assessed South Sudan’s agricultural production and food availability.

According to the FAO-WFP Crop and Food Security Assessment Mission to South Sudan (CFSAM) report, the country still has a “cereal gap” of 371,000 metric tons. Commercial imports will fill in part of the gap, but emergency food aid will still be needed due to high food prices and poor commercial supply.

WFP plans to provide 224,000 tons of food and nutrition assistance to about 2.8 million vulnerable people, the agency announced.

While an important tool, the CFSAM report – carried out between October and November 2012 – focuses on cereal production and not the overall state of food security in the country.

“The CFSAM is our best estimate, but it’s imprecise,” said Dr. Sue Lautze, FAO’s Head of Office in South Sudan. She added that a comprehensive agricultural census is needed covering fish, livestock and crops.

Insecurity remains a major challenge to South Sudan’s agricultural potential. Incidents of armed cattle rustling, conflicts between and among communities, and the activities of militia groups continue to inhibit farmers in affected areas, the agencies said.

There are increasingly violent incidents related to cattle raids in eastern state of Jonglei, as well as in Unity, Lakes and Warrap states.

Decades of conflict and displacement have taken their toll on farmers’ access to quality seeds and other planting materials, and eroded their knowledge of seed production techniques, which undermine crop productivity, noted FAO.

Earlier this year, the agency launched a $612,000 programme, to be implemented with the support of the agriculture ministries of France and South Sudan, to increase the availability and quality of seeds to South Sudan’s most vulnerable farmers. 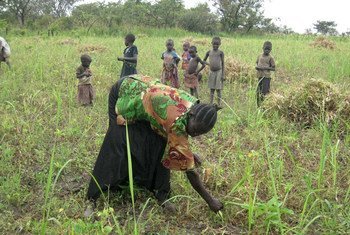 15 January 2013
Some 30,000 vulnerable farmers in South Sudan will be able to benefit from a new United Nations programme that aims to improve their livelihoods by boosting the quality of the seeds they use to produce key crops.