UN Photo/Violaine Martin
High Commissioner for Human Rights Navi Pillay (left) and President of the Human Rights Council Remigiusz A. Henczel at the High-Level Segment of the Council.
28 February 2013

The top United Nations human rights official today highlighted the work being carried out by her office to tackle numerous crises worldwide, and stressed the need to put people first and ensure that human rights remains a priority on the global agenda.

“2012 was a daunting year for human rights,” High Commissioner for Human Rights Navi Pillay said, as she presented the annual report of her office (OHCHR) to the Geneva-based Human Rights Council.

“The ongoing crises in Syria, Mali and the Sahel region, Palestine and the Democratic Republic of the Congo have resulted in thousands of deaths, massive displacement and grave violations, marked by a climate of impunity,” she stated in her wide-ranging report.

In Syria, despite particularly challenging circumstances, a handful of human rights officers, deployed within the UN Supervision Mission in Syria that was deployed for several months last year, “played a key role” in the prompt collection and analysis of information on issues such as protection of civilians, peaceful demonstrations and detention.

Ms. Pillay also recalled the role of the Commission of Inquiry on Syria, which she called “invaluable” in unearthing numerous grave human rights violations in that country.

Up to 70,000 people, mostly civilians, have been killed since the uprising against President Bashar al-Assad began in March 2011. In recent days, the Security Council was told of reported systematic use of sexual violence not just against women but also against men, boys and girls.

In Mali, a team of human rights officers has been deployed to the new UN Office in Mali ahead of the potential establishment of a peacekeeping mission.

Following fighting in January 2012 between Government forces and Tuareg rebels, Northern Mali was occupied by radical Islamists prompting the Malian Government to request assistance from France. The fighting displaced more than 430,000 people in the past 13 months, and coincides with reports of rape and brutalities, as well as reported abuses ranging from a lack of access to schooling to inability to farm or work.

A separate fact-finding mission is looking into these and other potential human rights abuses, Ms. Pillay said, to be compiled into a report she will present to the Council on 11 March.

In addition to the country-specific work being carried out, Ms. Pillay noted that her office has focused on providing direct support to women and girls who have been victims of human rights violations, adding that “we continue to witness horrific acts of violence against women in every region of the world.”

“Earlier this year, I was inspired by the groundswell of popular opinion and action focusing on violence against women in India after the appalling rape and murder of a young student in Delhi,” Ms. Pillay said, commending the special committee appointed by the Government of India for its work on the case and for the cause of combating sexual assault in the country.

Noting that the case in India gained particular attention while incidents of sexual violence occur in many other countries, Ms. Pillay said she hoped “the heightened awareness and popular revulsion” raised by the case would lead to a more concerted effort to tackle sexual violence.

Amid all of the challenges faced, the High Commissioner stressed the need to put people first.

“The many challenges we face, ranging from armed conflict to economic crisis, require a solid response from the international community,” she said.

“And human rights must be part of that response – reflected in the decisions of intergovernmental bodies, and throughout the work of the Organization. This is the core purpose of the United Nations.”

Tomorrow, Ms. Pillay and Secretary-General Ban Ki-moon are expected to participate in the Council’s second annual high-level panel on mainstreaming, focusing on the post-2015 development agenda and the role of education.

♦ Receive daily updates directly in your inbox - Subscribe here to a topic.
♦ Download the UN News app for your iOS or Android devices.
Pillay 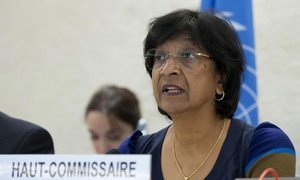